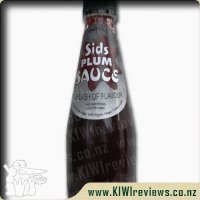 Disclosure StatementFULL DISCLOSURE: A number of units of this product have, at some time, been supplied to KIWIreviews by Sid's Sauce or their agents for the purposes of unbiased, independent reviews. No fee was accepted by KIWIreviews or the reviewers themselves - these are genuine, unpaid consumer reviews.
Available:
Yes

I have never actually used Plum Sauce before so I was happy to have a chance to try Sid's Plum Sauce out. My first thought about the bottle that it's in is that it is nice and unassuming, the bottle is nice and plain yet it suits this as you don't expect something nice and different when you taste it yet that's what you get.

I tried some of this straight, just on the side of some plain rice. My 5 year old didn't like it at all, my 3 year old was begging for more as was my 2 year old. I liked it but thought it would be better to try with something that I mixed it in with.

For dinner we had casserole mince (a vegetarian food) with pasta sauce, coleslaw and roasted potatoes. For the potatoes I made a sauce of oil, mixed herbs, salt, garlic and plum sauce. I ended up using half the bottle, and mixed it altogether. When mixed I coated the diced potatoes with the sauce mix and popped it in the oven till cooked. My 2year old (who eats very little) finished off her serving and then proceeded to steal her sisters potato. We had guests and one, who is a picky eater, had a second serving. It made a great taste and I'd do it again.

Overall this was a nice taste one cooked with something, I would use this again.

Kungfood dumplings are produced in New Zealand and include locally sourced meat and vegetables, resulting in a Kiwi Asian fusion. They were the brainchild of Dumpling Master "Jack" who was charged with finding a balance between delectable flavours and ancient techniques. The brand name "Kungfood" was chosen to attract customer attention with its play on words - the Chinese definition of Kung Fu is about mastering a skill through hard ... more...