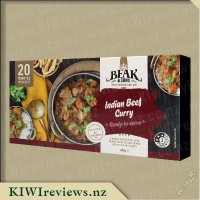 Disclosure StatementFULL DISCLOSURE: A number of units of this product have, at some time, been supplied to KIWIreviews by Beak & Sons or their agents for the purposes of unbiased, independent reviews. No fee was accepted by KIWIreviews or the reviewers themselves - these are genuine, unpaid consumer reviews.
Available:
at supermarkets nationwide

Our Beak & Sons Indian style Beef Curry is made with tender pieces of beef, slow-cooked in an aromatic curry sauce. 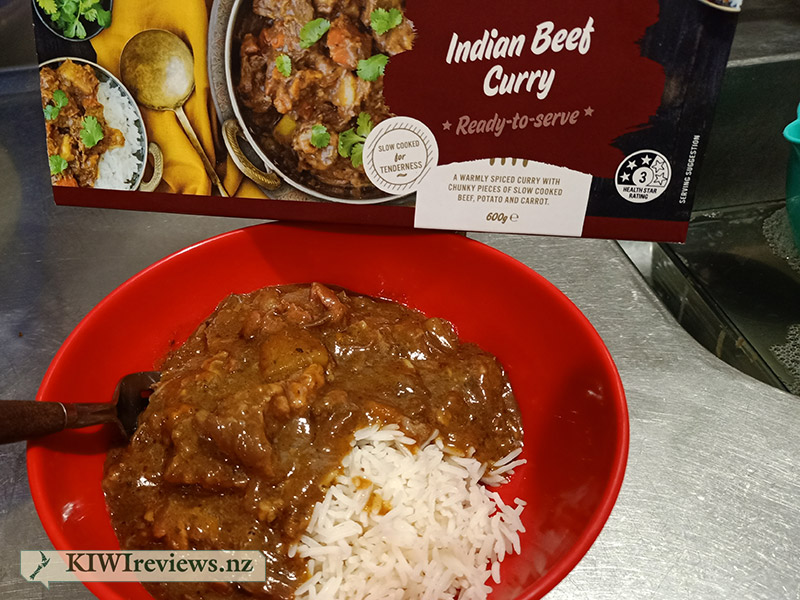 This was a bit of a mixed bag for me - it won high points for ease of preparation and convenience, but it didn't quite reach the point of being a really good example of the flavour it claimed. I have eaten many curries, some more authentic and true to their roots than others, and unfortunately, for me this fell a bit short of the 'authentic' benchmark.

I decided to serve this dish with rice, but having used all of my uncooked rice prior to this meal, I had to fall back on a packet of 2 minute microwave rice. Still, that turned out to be OK, and was a lot quicker than a drive to the store when I was already starting dinner later than planned.

Knowing the rice would lose heat faster, I cooked the curry first and set it aside under a foil lid to slow the cooling while the rice got zapped. Then, it took only a few moments to split the rice between two bowls and top with half-each of the curry. I had some poppadoms in the pantry that needed to be used up as well, so quickly dealt to a small stack of those too.

The meal was nice, but it was so sweet I doubt I would have known it as a curry in a blind taste test. It was an odd hybrid between a meaty bolognaise sauce and a curry, with a smooth and sweet sauce holding chunks of meat and some veges. A sharper, more traditional taste would have been more in line with expectations. Still, it was very edible and pleasant. The sauce was thick enough to be a curry or casserole, and in the end I think that's a better name for this dish - Beef Curry Casserole. If I had read that, this meal is almost exactly what that label would conjure in my mind.

I will possibly buy this one again in future, but I would not serve it as a curry, it would be served on mash with steamed greens on the side, or added to some more veges and used as a pie filling perhaps. It could also be interesting to try this out as the filling for baked potatoes or stuffed capsicums.

Overall, while not my favourite, it has plenty of potential as a 'feature ingredient' rather than as the main course of the meal. I will certainly be thinking of this if I want to make some little jaffle-style hand pies next Winter. 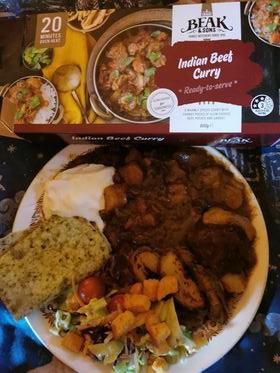 We enjoyed this casserole, despite the fact that the contents of the packet did not appear to match the description. It was a lovely beef stew, flavoursome and very tender, but... a curry it was not. At least, not like any curry I have ever tasted. We eat curry frequently, and the style does vary from country to country as does the heat factor, but I could not detect anything resembling a curry in this version. Unfortunately, the packet lists "herbs" and "spices" among the ingredients, but does not specify which ones.

My partner disagreed with me to a point because in the old days in New Zealand people used to make a spiced meal with sausages and call it curry. The flavour was almost imperceptible but nevertheless it was there, and to the Pakeha palate it was actually quite a daring venture into the world of Indian cuisine. I had never considered this to be a true curry, but then, I was the daughter of a sailor who brought back all sorts of exotic culinary secrets from his time at sea and took great delight in initiating me into the world of chilli and cardamom and other Oriental taste sensations. So perhaps this product is a curry in the old Kiwi tradition, and I had just mistaken the intent.

I had organised a sweet chutney and some yoghurt to counteract the expected heat, but they were not needed. However, since they were already on the plates, we enjoyed them anyway. I had no rice but we did have some home-made seed and turmeric bread, so that was added as well, with a little salad to deal with any unexpected heat. That was also redundant. So all in all it was an interesting meal, if a little different.

The price is competitive for a ready meal: given that there was a good-sized helping for two people, I think it was more than reasonable. There was a large amount of meat included, more than enough to satisfy the pair of us, and it was very tender as a result of the slow cooking process; we could also see the potato and carrot which had retained their shape and texture. When we took it out of its packaging for reheating, it looked and smelled enticing and we looked forward to tasting it. As are all similar meals from Beak & Sons, it was securely encased in a quality vacuum-pack inner and a strong card outer packet. Goods like this will keep for some time in the fridge which makes them especially useful for holiday times when visitors descend on us with little prior warning!

So - not my first choice for a curry by any means, but a tasty and very tender stew which would appeal to children and is certainly full of flavour in its own right. 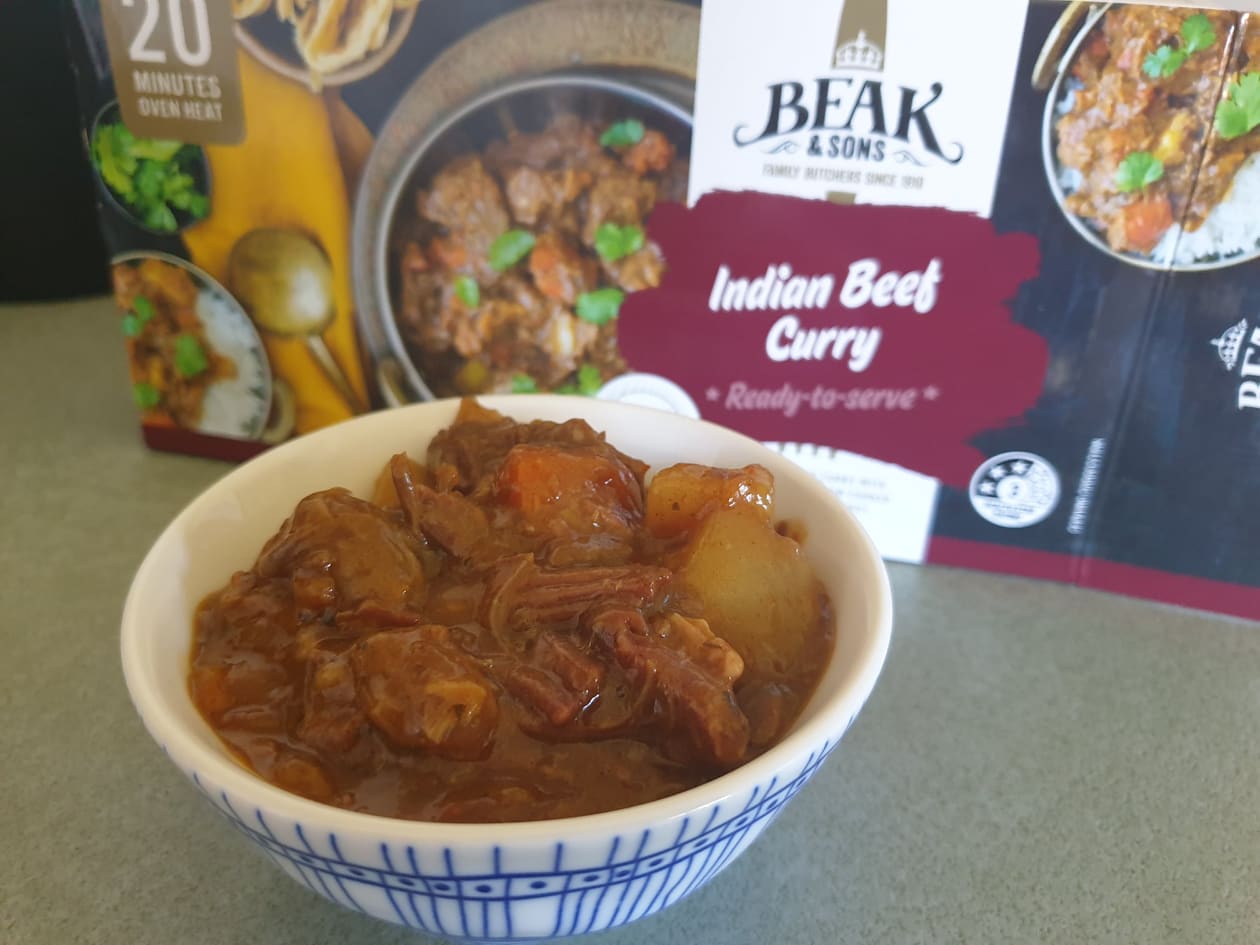 I remember when I first tried a Beak & Sons product. It was the first time I had tried ribs (as in, first time ever) and I was pretty amazed by the quality of the meat. Lots of meat, and well-cooked through, to keep it juicy and still tender, right out of the box. As the meals start to get more complex, however, that initial rating has started to dip a bit, as the meals start getting blander in flavour.

My mum hailing from the Caribbean, curries have been a staple throughout my childhood. My dad coming from England, casseroles have also been a staple. A lot of meat-heavy meals with flavourful gravies.

I refer to casseroles because that is what this Indian Beef Curry feels like. Chunks of potato and carrot are casserole staples, and with the slow-cooked beef, it has all pulled apart to create more of a thick stew than a curry. Looking through the ingredients the majority of the ingredients (maltodextrin, rice flour, thickeners 1422 & 415), seem more concerned with creating a certain thickness and consistency in the gravy, and yet the flavour is weak.

The meat is cooked well, and the potatoes and carrots are cooked through, but everything tastes the same. And whether the flavour is good or not, when all of the ingredients taste the same, everything becomes bland. I don't know whether the solution would be to keep some of the ingredients separate and combine them right before reheating, but without some kind of separation, all of the ingredients bathing together in a vacuum-sealed pack is a recipe for bland food. There are no real chunks of meat, so there isn't even a centre to the chunks that could provide a variation to the flavour profile. It is unfortunate.

Because the product is very easy to make. It comes in a beautifully designed cardboard box that has all the info you need, and a photo of the finished product that is full of colour. Inside we get the vacuum-packed meal in a plastic case. Because everything is a mush, quite a lot of it does end up stuck in the pack, you can't simply snip the end and squeeze it out as I have been able to do with other products. This one you need to cut in right open and scoop it all out. A quick five minutes in the microwave and it's ready to eat. Simple as that. No lengthy wait times, no difficult instructions. Simply heat and eat.

It is described as medium heat, but I would personally rate it more as a mild. There is a warmth to it that slowly builds on the tongue, but nothing that really feels specifically spiced; seemingly using more like a spoon full of curry powder than actual chilli pepper (which is disappointing because I can see flecks of pepper in there). It's by no means a bad meal, but a spoonful of curry powder does not make a curry flavour.

The bulk of the flavour comes from the gravy, and the yeast extract (along with the fat from the meat) forms a sharpness to the sauce. Again, making this feel more like a stew or casserole, rather than a curry. If it had been labelled as a spiced casserole, it'd be fine. But it certainly doesn't seem to have any of the bold flavours that an Indian curry has. I would almost expect to find this with a few more thickeners added and used it as a pie filling. That would work well.

But as an Indian Beef Curry, I'm rather disappointed. I could cook a curry with a packet paste in under 15 minutes, so the time-saving factor is not huge (you still have to cook your rice anyway), and the slow-cooked beef doesn't add much to the flavour profile. Perfectly fine if you need a quick meal and only have a microwave available, but the flavour just isn't distinctive enough to recommend for anything else. It's decidedly average.

Dumplings are popular for all occasions and eaten all year round.
•  Fantastic as finger food
•  Great side dish to rice, noodles or veggies
•  Nice eaten cold in lunch boxes
•  Party & BBQ ... more...