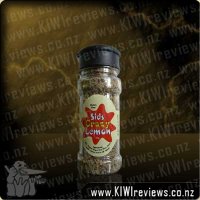 Disclosure StatementFULL DISCLOSURE: A number of units of this product have, at some time, been supplied to KIWIreviews by Sid's Sauce or their agents for the purposes of unbiased, independent reviews. No fee was accepted by KIWIreviews or the reviewers themselves - these are genuine, unpaid consumer reviews.
Available:
via Online Store and selected retail outlets

First of all the little container its in is a nice little size and does a great amount of sprinkle on what you want. Little hands can hold this well, while they add it to their own meals, this insures they don't get too much and they love it, my kids are 3 and 5.

I love lemon pepper salt so thought I would try this crazy lemon as the name suggests its crazy so how crazy is this? VERY, its GOOD so yummy in mash potato, you can taste the lemon a tangy yummy lemon taste but without the really sour part, has a little tang but nothing you can't handle, even my kids age 5 and 3 loved it. What else can you do with it, we went on an adventure with it, crumbed chicken, I added it to a coating I do with chicken nuggets and they kids ate them so fast it wasn't enough time to say slow down while eating.

It is fab for those rubs when you don't have lemon juice, I used it in my stuffed chicken as I normally put a lemon juice over the top of the chicken before wraping it in the tinfoil this time I used a little bit of lemon and the crazy lemon salt and WOW what a taste, the lemon juice and the crazy lemon really brought some flavour to the outside of a stuffed chicken. So I don't use too much at once I add it with other herbs and spices with gives everything a lemon kick.

I do love this product and hope it lasts a while before having to buy some cause at $11.50 its a bit of a high price when on a really tight budget, if it lasts a few months then it will be worth it, but we will see as its only been a week with it so far.

Well, after a few brief warm, sunny'ish patches I have finally managed to get a bit more BBQ'ing done. This time it was to try some marinated steaks, salads, and some BBQ'd fish. Never having done fish on a BBQ before, I called upon advise from a range of sources, and then kinda improvised from there.

So... the most common thing seemed to be either cook the fish skin-side down or wrap it in tinfoil. I liked the idea of the fish having a bit of grilling, but I also saw the wisdom of keeping flaky fish wrapped up. So, in the end... I did both. Grabbing an assortment of fish types, from budget Wharehou and Gurnard to some pricey but apparently wonderful Monkfish, I got the BBQ up to a really good heat, oiled the plate well, and slapped all the fish down skin-side UP to start with. This allowed me to get the flesh nicely seared, but only briefly. A quick stint on the grill-side of the BBQ to give it a nice pattern, then it was into individual foil packets with a liberal sprinkle of Sid's Crazy Lemon and a small knob of butter. Wrap them up, slap them on the BBQ and leave them for a little while. The softer fish was pulled off after about 7-10 minutes, while the more dense fish was left for another 6-8 minutes. It was all guess-work, but it seemed to work out. Because none of the juices or oils were allowed to escape during cooking, all of the portions remained moist and sweet.

Of all the types of fish, I was expecting the more expensive varieties to be the tastiest, but I was very pleasantly surprised to discover even the cheaper cuts were right up there, taste-wise. I actually really enjoyed the flakier varieties, simply because they lent themselves to a variety of post-cooking options, such as becoming part of one of the salads. Speaking of which...

This sprinkle also went really well as a crouton-coating! A bit of a gamble, this actually paid off really well. Grabbing some thick toast-slice white bread and leaving it to go a little stale, it was chopped into rough cubes and grilled in the oven in a shallow roasting pan with a little rice bran oil. Regular turning gave them golden, crispy sides and prevented any burning, but it also allowed the oil to sink right in. Don't be afraid of this, as rice bran oil is very healthy. After they were well toasted, I popped them out and while tossing them in a bowl with one hand, I sprinkled them with the Crazy lemon with the other. This ensured even coating. Then, I left them to drain a little before adding them to a nice leafy lettuce and carrot-curl salad, topped with a little drizzle of the Honey Mustard Vinaigrette. Utterly delightful, as you get the tangy bite on the greens, with a zesty lemon highlight coming through with every crunch!

Overall, I doubt I would ever use this to it's best effect, simply because when it comes to citrus I prefer it as a spread than a sprinkle... but for those who do enjoy this kind of thing, there are so many uses and because you don't need much per use the jar will go a long way - that's really important when you take into account the pricetag. I can see it going very well as part of a crispy chicken coating, being something really interesting over fresh, hot fries or home-made wedges, or even as something a little different in a salad filled roll to add a spark of interest. Well worth investigating for all foodies. If nothing else, you're bound to know someone who can take the rest of the jar off your hands if it turns out not to be your thing.

So popular has our Cec's Homestyle GLUTEN FREE Muesli been, that we thought it would be Smart to design a bar delivering the same sensational experience, only in the convenience of a bar!

Filled with nuts, seeds, honey, the 'super grain' Quinoa and NO FRUIT, this bar is a taste sensation without artificial flavours, colours or chemical binders... NO NEED.

Just read the nutritional story on the rear of the ... more...