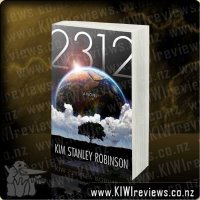 Disclosure StatementFULL DISCLOSURE: A number of units of this product have, at some time, been supplied to KIWIreviews by Hachette or their agents for the purposes of unbiased, independent reviews. No fee was accepted by KIWIreviews or the reviewers themselves - these are genuine, unpaid consumer reviews.
Available:
June 2012

year is 2312. Scientific and technological advances have opened gateways to an extraordinary future. Earth is no longer humanity's only home; new habitats have been created throughout the solar system on moons, planets and in between. But in this year, 2312, a sequence of events will force humanity to confront its past, its present and its future.

The first event takes place on Mercury, on the city of Terminator, itself a miracle of engineering on an unprecedented scale. It is an unexpected death, but one that might have been foreseen. For Swan Er Hong, it is an event that will change her life. Swan was once a woman who designed worlds. Now she will be led into a plot to destroy them.

Super-secret baddies plan to destroy humanity! Sounds familiar, doesn't it... it's the concentrated plot of almost every sci-fi thriller involving alien visitors, artificial intelligences, supercomputers, or secret agents. So frankly I was wondering what new spin would be put on this stale plot by such an esteemed author. To say I found the resulting tale to be a 'novel twist' is an understatement. In fact, the characters in this tale had such engaging twists of their own, I am surprised they were not all named "Esher".

However, to be honest, I did feel that the overall plot suffered fatally in the battle between 'engaging elements' - I found the quirky, erratic and somewhat gender-gifted characters and their antics far more poignant than the plot itself. That's not to say there was no plot - there was, and it did keep popping up here and there - but for me the tale was far less of a "whodunnit" and more of a journey of awakening for the main character, Swan Er Hong - spoilt brat, poor little rich girl, and naive extroverted performance artist.

Was this a deep, insightful journey. No,not even that. I struggled to find much to compensate me for the time taken to read it. It rambled. The interspersed "Quantum Drunkards Walk" segments - clearly intended to provide insight into background matters from the perspective of a voyeuristic Qube (a hybrid computer utilising standard digital computing with a quantum computing component spliced in) - to be an interesting, but ultimately annoying device to impart plot development. It was almost as though Robinson couldn't figure out a well-structured bridge between plot threads, so just threw his rough note into the manuscript and hoped for the uniqueness of the method to come over as a radical success in a Picasso'esque way.

Overall, did I like the story? Yes, I did like it. Not for it's method of telling, it's plot, or even it's characters per se. I liked this story because it showed me that even the most accomplished authors can head off down the wrong track and survive the train wreck. I also liked it for the not-really-characters, the Qubes. Stupid, but able to be 'clever' if programmed correctly, they gave me hope that as our technology gets closer to the quantum breakthrough, we will be able to make such devices. When we do, I WANT ONE PLEASE! Though, unlike Swan, I don't think I will get mine implanted in my skull, that's just too weird!

Flash is in trouble again! Life outside the fence just looks so much more exciting . . .The adorable wee dog from the bestselling Bad Dog Flash is back in another adventure. Excursions beyond the yard are very enticing for a young puppy.

He just can't help himself!