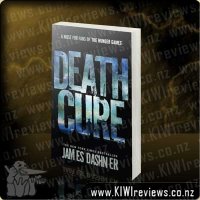 What Wicked doesn't know is that something's happened that no Trial or Variable could have foreseen. Thomas has remembered far more than they think. And he knows that he can't believe a word of what WICKED says. The time for lies is over. But the truth is more dangerous than Thomas could ever imagine.

One thing I always find daunting about a book is how many pages I have to read before it is finished. Picking this book up it looks huge, its 323 pages long with 73 chapters and an epilogue, also the writing is very small. The great thing is; the chapters are only about three to four pages long, so you feel like you are accomplishing a lot in a short time. I don't personally think they need so many chapters and I found most where completely unnecessary and in most instances three or four of them could of been combined together at a time.

This is the third book in the Maze Runner book and I found I got more answers with this book then the previous two. Personally I think the whole idea of running various tasks to see how the brain pattern will react is completely silly and how they thought they could get the cure to the flare from the blueprints is more than little far fetched - but even with the silly plots, as a whole I did enjoy the story.

Although, in a few places it slowed down completely and became rather repetative and a tad boring. I did find the action segments fantastic and extremely fast paced, a real page turner and I found myself dying to see how it will all turn out. The ending is completely over the top with too many things happening all at once such as the explosions, rat man, the Grievers it all just adds to the tension but it is also a complete over kill.

I also did not understand why there was the dire detest of Wicked from Thomas, Newt and Minho, when everyone else just took them at their word. The rebellion of the three of them was not entirely justified in my eyes and it was obvious Brenda could not be trusted but yet that issue was never fully addressed either. I found I am still left with questions and I still have some holes left that hopefully when the movie comes out next year they will be answered. But I still did enjoy the book.

This book had it all action, drama, adventure, and romance all rolled in to one. A little too science fiction for my liking it reminded me of such things as the Matrix, and Total Recall but in a more end of the world sense. I may have to read the Hunger Games books to see what they are like as this book says it is a must for fans of the hunger games so perhaps it would work in reverse too.

It contained action from start to finish probably only a page or two space before more action continued, it was very fast paced. I read the book in two days as with all the action going on it never seemed a good place to stop and put the book down. The story did well at creating suspense, making the plots twist, and making you want to go on to the next chapter.

The book is part three of a trilogy of which I had not read the first two books so some of what was going on was not particularly clear to me. A lot of the flashbacks or memories from previous experiences obviously covered in the first two books were annoying as they disrupted the action and did not do much to add to my knowledge of what might have happened before these events. I think given the chance I will have to read the first two books just to find out what some of characters had been through and where it all started.

Although very science fiction and obviously well dreamt up it wasn't hard to imagine that something like what happened in the book could easily happen in real life, which is a real scary thought. To put yourself in the place of the characters is difficult they go through so much physically and emotionally and have to make many sacrifices. Two of the main characters were killed off which was really sad, as while I was reading I had hoped they would find a cure and that one of the characters would be saved and it would all end happily ever after but it never came for this character.

The story follows mostly around one central character Thomas who has little memory of his past and does not know who he should trust. Some memories come to him in dreams but he does not even know whether to trust them. So quite an exciting journey finding out whether Thomas feelings of mistrust or gut instincts of trust turn out to be the right ones and who turn out to be the good guys in the end.

Coming to the end I felt it ended really abruptly. It was all action packed and then within a couple of chapters it was wrapped up and finished with leaving so many unanswered questions and so many more things that could have been touched on. Perhaps there should be a fourth book in the making? Overall a good read which I would recommend to others.

Well, to make a long story short, this is an awesome book! I thought the cover design was great, it was cool how, instead of there being a title, and an image behind it, the cover was black except for a few little extras such as the author and a quote from someone who probably read the book's manuscript, and then the title's words were actually like letters cut out of the black to reveal parts of the actual background image.

The beginning of the book got a bit confusing after a few pages, but a little look at the back cover showed me that this was not book 1 of a series, which I started off thinking it was, but instead book 3 of a series, so there were parts of the storyline that didn't make sense as the introductions of these parts originated in books 1 & 2 which I have not read yet. One thing that I was quick to realize was that there was a lot of bad language and written violence contained within the pages of this book, so this product is one that I would NOT recommend to young readers, for obvious reasons.

My favourite character would have to be Thomas, as A. he was the main character in this story, B. he was apparently the most important person in the book because apparently he was vital to completing the cure for the Flare virus, and C. he was pretty fearless, which is something that I often enjoy in most book characters. The realism of the story was just off the scale, taking into consideration that the trilogy is obviously based sometime in the future as the story mentions high-tech weapons and machinery.

I have no issues with this book, except for that it took me ages to read, and while I was reading the book I lacked the sensation of time going faster, if there was any sensation of time moving at a pace that was not the true pace , I would say it moved a little bit slower, but that is the largest of downsides to this book, it is not enough to topple the weight of all the upsides I have to this book. The price is OK, but it is sort off pressing itself against the wall of what is a fair price.

After taking every aspect of this book being taken into consideration, this is a good book, with a few bad patches, but cool none the same.