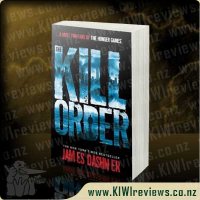 Disclosure StatementFULL DISCLOSURE: A number of units of this product have, at some time, been supplied to KIWIreviews by Scholastic (NZ) or their agents for the purposes of unbiased, independent reviews. No fee was accepted by KIWIreviews or the reviewers themselves - these are genuine, unpaid consumer reviews.
Available:
All Leading Book Stores

Although this book is not AS active as the other books in this series, the parts of the story that were active proved to be quite potent. The story itself was outstanding, it had a very moving atmosphere to it; I began to feel A whole load of emotions, as if I were at the scene, witnessing the events. At first I was a tad bit disappointed that the story did not began with the scene of the apocalyptic events of the "Sun Flares", but my wish came true later in the story when the main character, Mark, began to get flashbacks of his violent past. The storyline was very descriptive, which turned out to be a curse in some places as some of the scenes were quite hellish.

How the highly potent and contagious disease, the Flare, broke out after the Sun Flares ravaged the earth was quite surprising. What I had been led to believe after reading the other books in the series was that the Flare was an experimental contagion that spilled out of a virus control centre when the Sun Flares struck . What actually happened was that the Flare had been used as a population control measure, but it then rapidly mutated and spread beyond control.

The price is well-set, a book like this has a value to which the price given has perfectly accounted for. The realism of the story was exceptional, in fact what happened in the book could very well be the true and apocalyptic events of our future. Overall, the author has done a very good job on this book, and the story is so good that I will not be selling or boxing up this book anytime soon.

This book started off like I had missed half the story.....but it all started to make more sense once Mark had flashbacks (dreams or nightmares I suppose) to the disaster that has crippled the earth. Then things really started to get interesting....lots of action, fight scenes, people dying, alien type spaces shooting people with darts, people turning into mad crazed zombie type people....some of the chapters had me on the edge of my seat! I couldn't put the book down until the action settled down, so with so much action the book didn't get put down that much!

That being said, if you're the type of reader who just wants mindless action after mindless action, pick up The Kill Order....you won't be disappointed in it. The action scenes are very well written and, for the most part, thrilling. However, if you're a reader who values character development in books as opposed to action, The Kill Order won't be the book for you. While I do consider myself the reader who values character development as opposed to action, I found the book to be a fun, thrilling, and quick read, but sometimes mindless action just isn't enough.

I think I am a true romantic and do want all the characters to live happily ever after! But with this book and all the action I knew that the characters would be very lucky to survive this book at all....then at the end I was left wondering!! Not sure if there is a sequel but I would be keen to know what happened to Mark and Trina..the way I read the book all the characters eventually went crazy and probably died!

Maybe the author James Dashner tried something different as this book is the first of his that I have read and maybe he is way into action with lots of fights and death scenes etc but I like to get to know the characters within the books I read, I like to imagine who they are in my own head...and I just couldn't do it with this book.

The next action-packed adventure from Asterix and Obelix!

The roads across Italy are in disrepair. Defending his name, and to prove Rome's greatness, Senator Lactus Bifidus announces a special one-off chariot race. Julius Caesar insists a Roman must win, or Bifidus will pay.

Open to anyone from the known world, competitors arrive from far and wide, including Asterix and Obelix. With Bifidus secretly scheming, who will win this almighty chariot race?