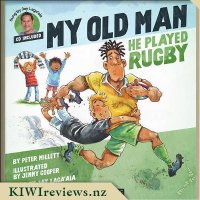 Disclosure StatementFULL DISCLOSURE: A number of units of this product have, at some time, been supplied to KIWIreviews by Scholastic (NZ) or their agents for the purposes of unbiased, independent reviews. No fee was accepted by KIWIreviews or the reviewers themselves - these are genuine, unpaid consumer reviews.
Available:
August 2018

My old man, he played ONE,
he played front row in the scrum,
with a HEAVE HO, HERE WE GO,
playing in the zone,
my old man came charging home!

You'll laugh out loud at the outrageous antics of dads of all shapes and sizes in this ball game to beat them all!

With illustrations by Jenny Cooper. Sing along with Jay Laga'aia on CD (included).

I picked this book to review because of it being about rugby and also as once I had reviewed it, it was something for a nephew who is rugby mad. I was not disappointed in this. Being topped off by having Jay Laga'aia's voice to sing along with.

Once this arrived I did have to fight with Miss 10, in which she did win and read this to me while I was preparing dinner. She struggles sometimes with some kids books but this she breezed through and that made a happy mum. Once I looked through this book I saw how some of the words were in bold and this made her reading really come alive. I did read this to Miss 8 that night and my reading was not as good or fun.

The illustrations in this book are outstanding, such detail and bright colours. Easy to see how the story is going and relates well to the part of the story on that page. The detail in the mud or the stains on the clothes is so cool, not just your stock-standard pictures like in some kids books.

Seeing that this book is $20, I did wonder if it would be one I would go out and buy. But after reading this, it is a book I will be highly recommending to my friends and family. It is an amazing book for any great little rugby fan. And if they know the song "This Old Man", I am pretty sure they will be singing it like we did the next day once I said to the girls how similar it was. 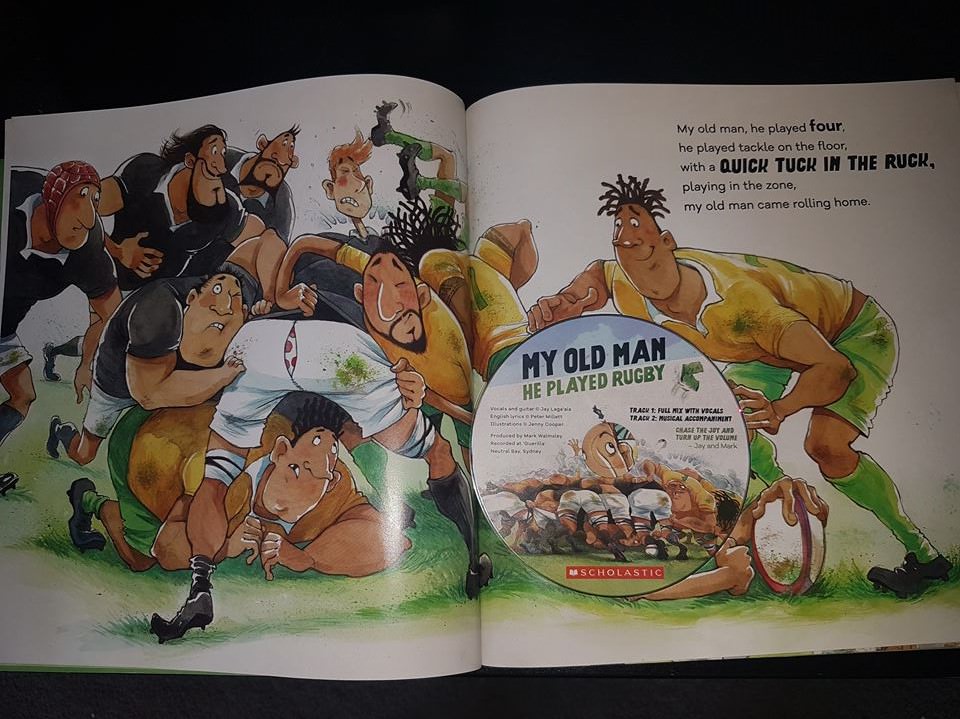 To take a very well known nursery rhyme and put a new comedic spin on it with a lot of kiwi themes is a very great thing in my books. When my allocation of Review samples arrived this time around this book was the first thing my children grabbed in anticipation which is very rare as there was also candy involved which they overlooked. They already had the music CD out and into the stereo system before I had a chance to see the book.

My children started to read along the words with the song but didn't get far in before my eldest son noticed in the illustrations one of the player's butt crack was visible which caused them to laugh hysterically. They continued to read along but always found themselves turning back to see the butt crack for another laugh. Then he found further in another illustration of someone with split shorts exposing undies and was laughing even more while joking around with the other children. Once the song had finished I don't think there was much time during the nursery rhyme that they were not laughing and wanted to play the song again instantly.

The illustrations in the book are very well done and contain great expressions on the faces for the situations. The writing is very humorous and appeals to both children and adults alike. Because of these reasons and also containing a music CD, this has a very good re-readability and listening to the song many times over I can see great value out of it. The CD also contains an instrumental selection that acts as a great karaoke type mode that the kids can sing to themselves.

I find this book and CD to be a great past time for the children and it keeps them entertained for quite some time. When you see something that brings so much joy and laughter to children you know it's defiantly a winner. I recommend this to anyone that has young children and is looking for a humorous read-along story that will be cherished. 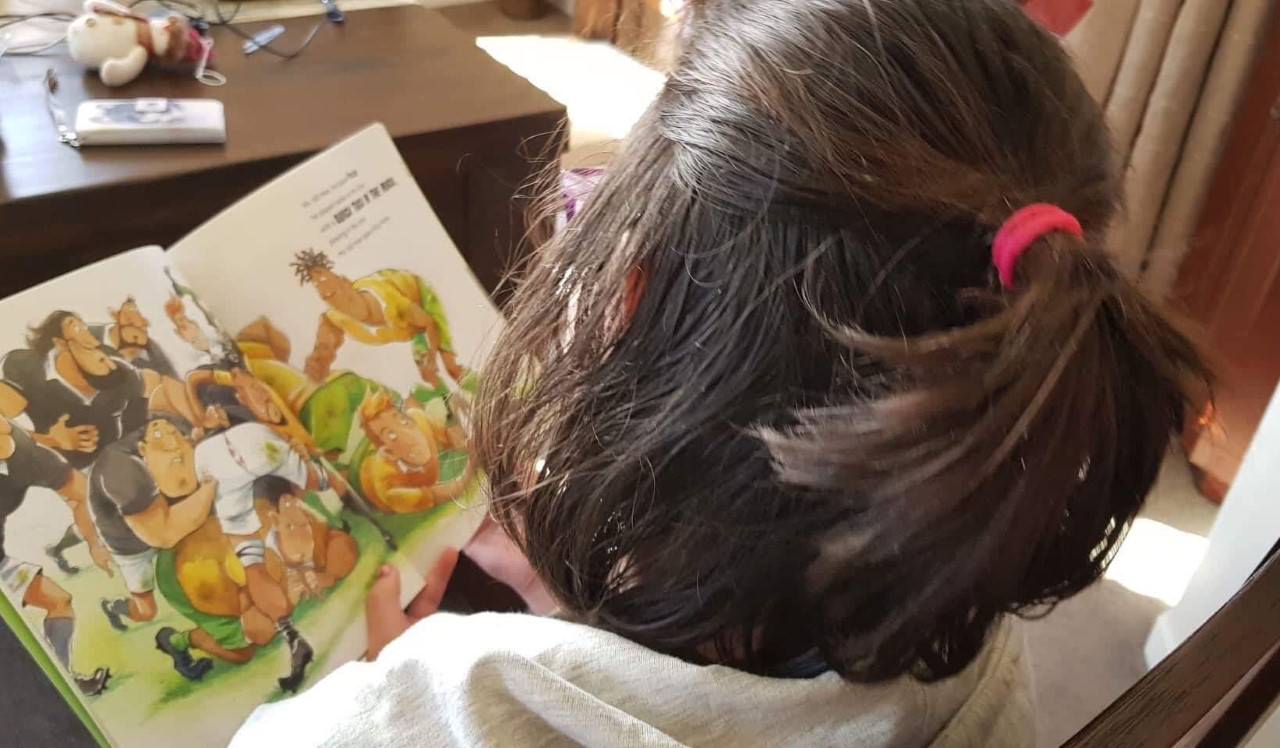 This is a wonderful story for little kids! Our Mr Two and Miss Four love sport; they are always on the go and like to watch both live games and tv broadcasts. And like many little ones, they also love to "sing" and dance, preferably when other people join in, although if they are on their own they will dance anyway. This book includes a CD which has two tracks, one with a vocal track included, and the other a karaoke version. We played the CD before reading the book and were intrigued to find that it also includes appropriate sound effects to put the listener in the mood!

I did not actually read the book to them because Miss Nine offered to do the honours. I was more than happy to let her get on with it and just listen too. She read the book through the first time, then she sang it through - with the two little ones joining in as best they could. The tune is well-known, of course; it is a version of the counting song, "This Old Man", so Miss Nine and Miss Four already knew the original. By the time she was on the third round, all three of them were singing and clearly enjoying themselves.

We all found the artwork hilarious. The pictures feature dads of all shapes and sizes, and show all sorts of funny incidents like pants being pulled down in the scrum, dads landing on top of others, pants splitting, stretchers coming in to remove an injured dad, and lots and lots of mud everywhere. Miss Nine and Miss Four kept giggling at the bare bottom of the player whose pants were pulled down; that sort of humour appeals to kids of that age!

There is so much detail in each picture that the children kept stopping as they found more and more things to look at. The presentation is a riot of movement, just as there would be in a real-life rugby game, and sometimes it is hard to know what to look at first. And it was hard to tell which team the dads were playing for as they appeared to change sides half way through. One team was in black tops and white pants while the other was in yellow tops and green pants. We had to decide from the words which side the featured dad was on at any one time. Luckily, they wore a number in each picture which matched the numbering in the song! And it appears there was actually a different dad for each number as they were all different sizes with different haircuts to boot!

When I left the children hardly noticed. They were too busy playing the CD yet again and singing along at the tops of their voices. I think we can say this book was an unqualified success!

Forensic Physician, Dr Anya Crichton, working part-time at the Sexual Assault Unit, fears a serial rapist is on the loose when women with similar injuries appeal for her help.

Anya's investigation is hindered by frightened victims unwilling to report their attacks, the media frenzy surrounding a recently released rapist-murderer and alarming evidence that a fellow pathologist is acting improperly.

Anya knows she has to act quickly - the rapist has started to kill...