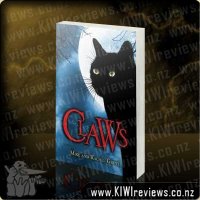 Emma's sister is missing. Her parents have spent all their money trying to find her and the family has moved to a trailer park for Crags - magical creatures that live on the edge of human society - next to the dark forest.

Here Emma meets a smooth-talking cat named Jack who has a plan to rescue her sister. He shows her how to shape-shift, to develop claws and cat senses. But cat magic isn't easy, and Emma soon learns her sister is in the thrall of the faeries, the most beautiful and dangerous creatures of all.

I found this a truly unusual story. I can't say I know a lot about magic or have read a lot of stories that involve magic so a lot of the terms they used were completely new to me. I don't know if the names are common in magic like ratters, and crags and the likes as this was the first time I had heard these terms use. More common things like cats and trolls were familiar though. It was actually easy reading and although I found the story unusual I couldn't put the book down reading it from the start to the finish in one evening. It had a lot of action and a good story line so there was always something going on that kept you interested.

I don't know if I would read the story again as I am generally not a big fan of fantasy stories, my main reading type is of the horror genre, although the story did have some intense moments at times. The book is aimed at young adults/teenagers and I think it suits this age group well as they probably still have more imagination than me to get drawn into the magical content of the story. I have given the book to my 10 year old daughter to read and I think she will enjoy it, as she is very much into fantasy novels and movies at the moment with the popularity of movies such as twilight. I think the book would actually work really well as a movie for people like me who don't have vivid imagery seeing the story brought to live would be amazing. I think it would become a very popular movie as the story line and content would really lend itself to the big screen.

The story had some nice messages about family and friendship weaved in amongst the magic as Emma uses the crags and her new friend Jack the cat along with a little bit of magic to look for her missing sister. Friendships develop and Emma learns things about crags she never knew before having to live among them. I also liked the messages of personal sacrifice that were in the story that showed how sometimes friends and family are more important than you think.

I really enjoy a good fantasy novel. There is so little magic in this world, that sometimes I just want to wrap myself in a fantastic tale. Claws is one such book. As soon as I opened this book, I knew it was going to be special. The language flows so easily. After the first paragraph, I found it difficult to take a break or put it down.

I really liked the way each chapter starts with a quote. I started to look forward to whatever the newest tidbit of information would be conveyed there. I liked the characters, and it was interesting being inside the head of someone quite different to me. The family in the book are Vietnamese, so some of her food cravings or childhood memories were really alien to me. It made me want to know more about their culture. That said I could still totally relate to her and her feelings about the situation her family were in.

While this is a fantasy book, it is set in an alternative reality of our current time Earth. So, there is still the internet, and everything is pretty normal. Except that the world is also inhibited by Crags, or magical folk. It kind of reminded me a little of the game Shadowrun (but not as futuristic) or White Wolf's Changling games. This made it easy to relate to, because I have played many of these games and I'm use to the idea of orcs, goblins, faeries mixing with humans in present time.

One thing I found pretty neat was when a crag had a special mind power over humans, this was treated so subtly in the book. Other authors sometimes make a big deal out of the power of the suggestion clouding the mind of the hero. Here, the suggestion feels very much like the character's own idea. You really don't get a sense you should be wary until the moment has passed.

If you enjoyed the Whizz Pop Chocolate Shop, I think you'd get a kick out of this book as well. Its a very similar style of book, though a bit darker.

There are many rumors about the bay off Guadalcanal in the Solomon Islands. Some say it was the site of the lost empire of the Solomon king and that great treasure lies beneath the waters. Others say terrible things happened here, atrocities and disappearances at the hands of cannibal giants. Which is exactly what attracts the attention of husband-and-wife treasure-hunting team Sam and Remi Fargo.

How could they resist? On a hunt from the Solomons to Australia to Japan, what they find is both wonderful and monstrous - and like nothing they have ever seen before.