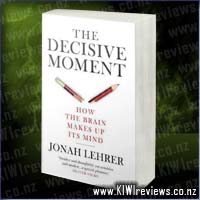 Disclosure StatementFULL DISCLOSURE: A number of units of this product have, at some time, been supplied to KIWIreviews by Text Publishing or their agents for the purposes of unbiased, independent reviews. No fee was accepted by KIWIreviews or the reviewers themselves - these are genuine, unpaid consumer reviews.
Available:
January 2010

When buying a house, for example, it's best to let our unconscious mull over the many variables. But when we're picking stocks and shares, intuition often leads us astray. The trick is to determine when to lean on which part of the brain, and to do this, we need to think harder (and smarter) about how we think.

Lehrer's goal is to answer two questions that are of interest to just about anyone, from CEOs to firefighters: How does the human mind make decisions? And how can we make those decisions better?

A very interesting book, with a lot of food for thought. I found it quite a 'concentrated' read - best digested in small doses. Not boring, I hasten to add, just a very full and thorough coverage of the topic. Aspects were reminiscent of the material handled in Malcolm Gladwell's book Blink: The Power of Thinking Without Thinking.

In The Decisive Moment, Jonah Lehrer presents a large selection of case studies and examples from experimental research and from the public knowledge base to illuminate the nature of decision making.

Lehrer notes that since the ancient Greeks, assumptions about how we make decisions have revolved around a single theme 'humans are rational'... the best decisions come from consciously analyzing alternatives and carefully weighing pros and cons [subduing the emotional brain]. He then asserts there is a problem with this assumption: it's wrong!

The body of this work considers experimental and natural life situations demonstrating the strengths and weaknesses of the rational brain and the emotional brain. The truth, it seems, is that making good decisions amounts to correctly balancing how much we rely on each part of the brain. There are situations, such as singing the right note; making the perfect golf swing; selecting the best strawberry jam; or even buying a house, when the weight of trust goes best in favour of the emotional brain, that old 'gut instinct'. Perhaps contrary to expectation, it is the mundane problems of everyday life that fare best from the conscious analytical scrutiny of the rational brain.

The authors final desire for the reader, now equipped with greater awareness of how the brain works, is that when making a decision: consider what kind of decision it is and the kind of thought processes it requires. Thinking about thinking will help us all steer clear of stupid [avoidable] errors.

A solid argument and worthwhile read.

Quirky observation:
The only bit I found odd was the economists expectations when they first started playing the 'Ultimatum Game' - in which a Proposer is given $10 and must decide on an amount to offer a Responder, if the Responder accepts the deal then both parties keep the respective amounts. Apparently, economists believed the Proposer would naturally offer a minimal amount (say $1 or less) and the Responder would accept it since any amount offered was better than nothing. I found it quite incredulous that they would ever think that (perhaps you have to be an economist?)... my immediate conviction was that proposers would naturally offer $5, since they would empathetically predict that pride and a sense of fair play would cause responders to reject an obviously unreasonable offer. After all, who would willingly lose face and override their dignity and ethics for a dollar or for 10 cents??? Not surprisingly (to me at least) this is exactly what was found repeatably, no matter how many times or where in the world this experiment was undertaken, Proposers always made fair offers. (Lehrer describes how only individuals with a certain brain condition actually fulfil the economists prediction...)

But there is a great deal more to this bucolic scene than meets the eye. Both Hatu and Hava were raised on the secret island of ... more...