The 39 Clues - Cahills vs Vespers 1: The Medusa Plot review 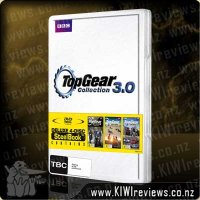 The Top Gear road trips have fast become a favourite with fans of the show, and the challenges included in this collection prove that Top Gear likes to take its challenges to the furthest point possible, creating the ultimate test of man against machine.

BOTSWANA: In this edition of The Great Adventures, the team ditch the draughty aircraft hangar and head for the wide open spaces of Botswana, on a 1,000-mile safari across the spine of Africa. To make things as hard as possible for our intrepid trio, the producers challenged each of the presenters to complete the journey in a normal two-wheel drive car bought for just 1,500 Pounds.

VIETNAM: Jeremy Clarkson, Richard Hammond and James May travel to Vietnam and are told to travel the entire length of the country in just eight days, thereby achieving what the American military failed to do in ten years.

SOUTH AMERICA SPECIAL: What happens when you take a tall man in jeans, a small man dressed as Ray Mears, and a shaggy haired man with the most ridiculous tool belt you've ever seen and you drop them deep in the Amazon rain forest? Well, either you don't see them again until some proper explorers find their still-screaming skeletons. Or, as actually happened, you let them take along a trio of temperamental 4x4s and set them off on a 1000 mile journey through forest, over mountains, and across deserts in what turns out to be Top Gear's most exciting, dramatic and visually stunning adventure to date.

ROMANIA: When the Top Gear team received whispers that deep within Romania lurked one of the world's best driving roads they had no option but to seek it out and, to do so, they got hold of three superb convertible supercars in what became an incredible Eastern European adventure. From a noise test underneath the world's heaviest building and James's romantic encounter with the Dacia Sandero to a small accident with the locals and Jeremy in a silly hat, this trip has everything. Best of all, it culminates with the boys enjoying three wonderful cars in absolute petrol head nirvana.

BONNEVILLE: Jeremy, Richard and James head to the United States to see if the Americans still make any good cars. Unfortunately, there's a small error with their visas and the US immigration authorities will only let them in if they promise not to do anything entertaining. So, with serious faces on, they set off on a proper old fashioned muscle car road trip to the amazing Bonneville Salt Flats. Along the way Richard becomes an amateur aerodynamicist, Jeremy discovers a strange security problem with one of their cars, and Captain Slow discovers a hitherto hidden love of fast driving in what turns out to be a dusty, dirty slice of pure car lover's heaven.

Jeremy Clarkson on a motor scooter. For anyone familiar with the Top Gear franchise, Jeremy Clarkson's motoring ramblings, or for that matter, Jeremy Clarkson's ramblings, you will understand that this would never happen. Not enough wheels, no roof (what would you do if it rained?), no power and probably designed by the lazy Mexican who triggered the Global Financial Crisis by having a siesta. However it did happen and it happened here on Top Gear 3.0, or more to the point, in Vietnam.

The episodes contained in the Steelbook are not your standard Top Gear series fair - they are the specials, the road trips, the challenges along the way, the lurking "Born in the USA" blaring star spangled banner adorned mini-chopper or the world's worst car ever, or the Volkswagen Beetle waiting to take over from the unfortunate unrepairable piece of machinery the lads have purchased for their journey which has invariably broken down. These are the boys own tales that get you willing them on as a Mercedes Benz stripped of doors, panels, well anything that weighs something that is not important enough to the process of keeping it moving, is driven ever so hopefully through a wildlife reserve in Africa, or the 4WD vehicles purchased site unseen from the internet in a South American country more widely known for it's drug production and general civil unrest than anything else that are delivered by barge to a point on the Amazon delta that must first be driven off the barge before bushwhacking through rainforest.

The Steelbook is a thoroughly enjoyable set of romps that many men will be able to get away with watching with their other half around simply by mentioning that Richard Hammond is in it. Keep an eye out for Stig's international cousins making appearances along the way also.

I was not actually the family member assigned to review this and quite frankly I'm writing this just a little bit grudgingly seeing as I don't do motor sport, cars or anything else to do with them bar driving from A to B.

*mumbles* This DVD is sodding funny and I nearly peed myself laughing. *mumbles*

Unfortunately I caught the vast majority of this while the husband was delightedly watching and found that while yes there is a lot of car chatter (*blah blah blah blah blah*) watching these guys travel through the different countries and carry out their assigned challenges was sodding hilarious and at times also breathtaking.

From watching a cows head being hidden in James May's car during the drive through an African Wildlife Reserve to the breathtaking views of South America, this DVD actually has something for everyone to enjoy.

So ladies, feel to give in and let the other half enjoy some motoring because you'll probably actually enjoy this specials series also!

PS: However I deny EVER admitting Richard Hammond is "kinda a hottie"