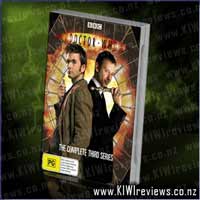 Disclosure StatementFULL DISCLOSURE: A number of units of this product have, at some time, been supplied to KIWIreviews by Roadshow (NZ) Ltd or their agents for the purposes of unbiased, independent reviews. No fee was accepted by KIWIreviews or the reviewers themselves - these are genuine, unpaid consumer reviews.
Available:
At all good DVD retailers.

Bound by tragedy and blood to a dangerous, otherworldly mission, two brothers travel in mysterious back roads of the country in their '67 Chevy Impala, searching for their missing fatherâ"and hunting down every evil supernatural force they encounter along the way.

Bring home all 22 episodes of the first season of the thrilling new show, Supernatural along with must-own bonus features. Supernatural is a completely new kind of thrill ride that takes viewers on a journey into the dark world of the unexplained.