Doctor Who - Colony in Space review 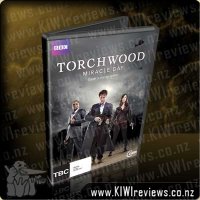 Disclosure StatementFULL DISCLOSURE: A number of units of this product have, at some time, been supplied to KIWIreviews by Roadshow (NZ) Ltd or their agents for the purposes of unbiased, independent reviews. No fee was accepted by KIWIreviews or the reviewers themselves - these are genuine, unpaid consumer reviews.
Available:
December 2011

Death is not an option.

Torchwood returns for a fourth series in which the team face their greatest test yet to find out how and why has the whole world mysteriously become immortal. Torchwood is back and more explosive, sexy and thrilling than ever!
One day, nobody dies. All across the world, nobody dies. And then the next day, and the next, and the next, people keep aging - they get hurt and sick - but they never die. The result: a population boom, overnight.

With all the extra people, resources are finite. It's said that in four month's time, the human race will cease to be viable. But this can't be a natural event - someone's got to be behind it. It's a race against time as C.I.A. agent Rex Matheson investigates a global conspiracy. The answers lie within an old, secret British institute. As Rex keeps asking "What is Torchwood?", he's
drawn into a world of adventure, and a threat to change what it means to be human, forever.

I love Torchwood, I love the characters, but Miracle Day...... It's been 6 months and I'm still not sure exactly what I think and feel about it. It had a good story line, had good actors, action, comedy, a bit of romance (just to spice things up) and a good amount of little twist and turns in the plat, but, it just dragged on too much. Each episode could have been cut in half and still we would not have missed out on anything.

But in saying that, it is a good addition to the world of Torchwood, and in a round about way, Doctor Who. But it's not something that I could watch again any time soon. Maybe in a couple of years, when I watch the entire series in one go. But luckily that's a few years away, as I just couldn't face Miracle Day again any time soon.

Let me start by saying that I really love Torchwood. John Barrowman is amazing as Captain Jack, Eve Myles is inspirational as Gwen Cooper. Its a spin off from the Dr Who re-boot that is much more adult, and works on so many levels. Okay, its a bit cheesy here and there, and it can get pretty "art house" in the bedroom scenes, but it is still a good sci-fi.

So why did I find the Miracle Day season such a disappointment? Mekhi Phifer who was in Lie to Me as an FBI agent, joins the Torchwood team as a CIA agent (Rex). I think the biggest issue was that the show was dumbed down somewhat, possibly for an American release. We seemed to be shouting at the TV more than normal "Even I figured that out 20 minutes ago!". The concept was really good, but the script and execution of it was sub-standard for what I expected from the makers of Torchwood. I do wonder if being asked to suddenly like 4 or 5 new characters for an already established fan was too big an ask.

Will I still watch Torchwood? Yes I will definitely continue to give it the benefit of the doubt. There are new series that have since been released and I'll be happy to watch them. But I don't think I'll watch Miracle Day again.

After the shortened down five part series three mini-series I was looking forward to season four, and yet not quite looking forward to it either, I mean first off they had killed off 3 of the 5 main characters in the last two series, and secondly it was moving from the UK to the USA, and it was going to be fleshed out with new characters most of whom were going to be American..... I mean Torchwood is a Doctor Who spin-off and Doctor Who is a british institution, how can they do this???????? Well the fact is that without the financing of the show by the Starz network in America we wouldn't have this 10-part mini-series of Torchwood either.

But enough of my ranting, now on with the review.

The first few episodes I couldn't quite get in with, they seemed a little bit off to me, whether it was the fact that the American actors were having trouble understanding the British writing or what I don't know. Some of the American actors seemed to be either forcing their lines, or were just over-acting, point in case Mekhi Phifer who plays 'Rex Matheson' he just seemed to be playing his part a bit unnatural, a bit forced. However by the fourth and fifth episodes everyone seemed to be finding their stride.

The story arc is a well thought out arc and is definitely worthy of a Doctor Who universe story. That being said I feel it would have been better as a series backstory arc, but they never listen to what I say.....

While I felt it was a bit drawn out the ending did make it worthwhile and with the little twist/surprise at the end it makes me want to see what happens next, so in the end what really mattered was that I got my Torchwood fix, now if only I don't have to wait another 2 odd years for the next installment of this sci-fi series.

Flashing between past and present, a fractured family confronts haunting memories of their old home and the terrifying events that drove them from it.