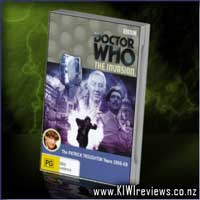 Disclosure StatementFULL DISCLOSURE: A number of units of this product have, at some time, been supplied to KIWIreviews by Roadshow (NZ) Ltd or their agents for the purposes of unbiased, independent reviews. No fee was accepted by KIWIreviews or the reviewers themselves - these are genuine, unpaid consumer reviews.
Available:
At All Good DVD Retailers

Doctor Who - The Invasion product reviews

This unique project uses animation based on the original actors and set designs to fill in the gaps as seamlessly as possible. The end result brings the second Doctor back to life in a beautiful broadcast quality animation with restored audio recording of the original transmission.

This eight-part story sees the Doctor, Jamie (Frazer Hines) and Zoe (Wendy Padbury) arrive in London in the 1970s, where an eminent computer scientist has been kidnapped. With the help of UNIT, the Doctor discovers he is being held by Tobias Vaughn, the managing director of the world's leading electronics company in league with the Cybermen in a plan to invade Earth. Once successful, Vaughn intends on seizing power for himself...

I'm a Dr Who fan from way back (about when I was old enough to watch TV and know what was going on) and I am one of those people who preferred the earlier Doctors to the later ones (excluding the latest two), and while I still prefer John Pertwee, Tom Baker and Peter Davidson, the first two Doctor's are still right up there.

This classic 8-part story features the return of the ever frightening Cybermen (hey when your only young they are frightening). Patrick Troughton plays his Doctor as only he can with that slight sense of eccentricity and wisdom combined.

This 8-parter was almost lost to the world due to the fact that parts 1 and 4 had disappeared from the BBC's archives, however with some cunningness and ingenuity they have recreated these lost episodes by using a combination of excellent animation (from a company more commonly associated with kids shows) and a collection of audio recordings made by die hard Doctor Who fans (or possibly more likely fanatics) who religiously recorded the audio part of the TV shows when they aired (there is a feature on the 2nd disc of this set about this) by any means available to them.

These wonderful people then gave their recordings to the BBC for archival and posterity. I bet they never thought they would be used to help complete a wonderful Doctor Who story that was almost lost to us.

The animation is of a good quality and is a worthy representation of the Doctor Who universe. The soundtrack is excellent especially considering the source of the audio for episodes 1 & 4.

The story line is classic Doctor Who and I have to give kudos to the writers who thought to bring back Colonel/Brigadier Leithbridge-Stewart and his new UNIT group (who were to feature extensively during the Pertwee era).

And personal choice, it's Doctor Who it's gotta get a 10