« Doctor Who - The Doctor, The Widow And The Wardrobe review 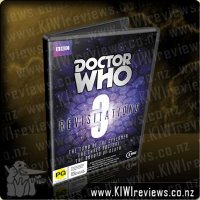 This box set features special editions of three classic Doctor Who DVD releases - The Tomb of the Cyberman, The Three Doctors and The Robots of Death - remastered, repackaged and reappraised here with over 40 exclusive new Special Features!

The Tomb of the Cybermen
Starring Patrick Troughton. For centuries, the disappearance of the Cybermen from the universe has been a mystery. The Doctor, Jamie and Victoria arrive on Telos - once the Cyber home world - just as an Earth expedition uncovers the entrance to a long-lost control centre filled with baffling technology.

The Three Doctors
Starring Jon Pertwee, Patrick Troughton & William Hartnell. The Time Lords are in crisis. A powerful force is draining their energy into a mysterious Black Hole - and they must recruit the Doctor to save them. But one Doctor isn't enough for this mission.

The Robots of Death
Starring Tom Baker. The TARDIS, carrying the Doctor and his new companion Leela, arrives aboard a huge sand miner on a deserted world. The small human crew relies almost entirely on robots to carry out their every task and whim while they mine the planet's rich minerals.

A fantastic collector's item, each story has been remastered with a staggering selection of brand new content, Doctor Who: Revisitations 3 Boxset is a must have for fans of our intrepid time traveler. Special features include behind the scenes, making ofs, documentaries, commentaries from main cast and much, much more!

As with the previous two releases of Revisitations this box set include 3 episodes that have been remastered with all new extras especially for this release by the BBC.

This particular box set contains two really great stories and one that I feel was not really one of the better ones, but it still wasn't a really bad one either.

As with the other box sets in the Revisitations series, we get a bit of a cross section of Doctors, in fact in this particular one we get 4 different Doctors, however one of these (William Hartnell) is only seen in pre-recorded video footage as he was unfortunately too ill to actually be on set for the duration of the filming. In fact this was the last ever time that William Hartnell played the First Doctor, and was in fact his last acting role before his death in 1975.

So first up in this set we have the great Patrick Troughton series 'The Tomb of the Cybermen' where surprise, surprise the Cybermen make a reappearance for the third time. This time they are on the planet Telos where they have been resting in suspended animation, but where nefarious persons are out to reactivate them for their own sinister purposes, but as with any Doctor Who story it all goes completely wrong for everyone. As with the earlier released serial The Invasion this is a brilliant Patrick Troughton serial. In the timeline this serial occurs before The Invasion and once again the Cybermen are just as menacing as they can be, even 55 years later

Next we have 'The Three Doctors' this in my opinion is the weakest of the three, but still an okay watch. Here we get Patrick Troughton and Jon Pertwee joining together with William Hartnell appearing in image only on video screens. This serial introduces us to the Mega Time Lord 'Omega' who also appears in the fifth Doctor serial Arc of Infinity. As in the 'Arc of Infinity' Omega is trying to escape from the Antimatter universe where he was flung when he created the supernova that powers the Time Lords home-world of Gallifrey, and of course only the Doctor(s) can stop him.

Laslty we have the excellent Tom Baker serial 'The Robots of Death' after watching this episode I had this haunting feeling I had seen something similar before, and then after looking through my collectio of sci-fi DVDs I realised where I had seen something similar before Voyage of the Damned. While it's nowhere near a direct copy it certainly has some similarities such as killer robots and a crazed madman.

So once again another great release in the Revisitations series.

The inspirational story of New Zealands greatest-ever day at the Olympics comes the true story of three misfits whose lives connected one glorious hour in Rome on 1 September, 1960.

THE GOLDEN HOUR is a documentary-drama in the style of TOUCHING THE VOID which recounts what is one of New Zealand sports greatest ever moments.

Based on the true-life heroics of iconic New Zealand Olympians and runners Peter Snell and Murray ... more...