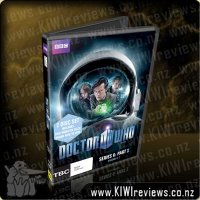 Disclosure StatementFULL DISCLOSURE: A number of units of this product have, at some time, been supplied to KIWIreviews by Roadshow (NZ) Ltd or their agents for the purposes of unbiased, independent reviews. No fee was accepted by KIWIreviews or the reviewers themselves - these are genuine, unpaid consumer reviews.
Available:
August 2011

The Doctor returns, alongside newly weds Amy and Rory, to face monsters and mysteries and adventures all across time and space, in a thrilling new series of Doctor Who. Together they'll find themselves in sixties America, battling the invasion the world forgot, then journey on the high seas of 1696 aboard a pirate ship, to solve the mystery of the Siren. In a bubble universe at the very edge of reality, the Doctor will meet an old friend with a new face, and in a monastery on a remote island in the near future, an industrial accident will take on a terrible human shape. And waiting for them, at the end of all this, is the battle of Demon's Run, and the Doctor's darkest hour. Can even the truth about River Song save the Time Lord's soul?

Only two things are certain. Silence will fall. And a good man is going to die...

Special Features
• The Silence - Look behind you... featuring exclusive behind the scenes footage, the silence is broken on the most terrifying creatures to ever mess with the Doctor's mind. With never before seen interviews and designs from the Doctor Who production team.
• The Gangers - See the flesh made real in this exclusive featurette on how the Doctor Who team created The Gangers. With exclusive footage of these 'doubly' scary new monsters, behind-the-scenes action and interviews with the cast and crew.

I have been having mixed feelings about the new Doctor Who of late, first I lamented the loss of David Tennant as what was most certanly one of the best Doctor's to have ever played the role, to seeing series five under a new man in charge 'Steven Moffat' and a new Doctor 'Matt Smith' and thinking it was good, but not quite brilliant. Then seeing the christmas special and having my misgivings start to be reversed, then along came part one of series six, and I must say this one is a real mixed bag as well.

The opening two-parter is certainly quite a risk, but one I felt worked, and the little shock twist in the beginning of Episode one was brilliant and totally unexpected. the next couple of episodes I felt were good, and certainly served their purpose, part of which was to lay the framework for the backstory to part one. The next two episodes were very good episodes and hold many clues and are completely vital to the current backstory, these two episodes deal with human dopplegangers (duplicates) made up of a substance called 'The Flesh', the importance of this is made perfectly clear at the end of the two-parter.

Finally we get to the final episode in this set and what a cracker episode it is, action suspense, drama and a plot twist that I don't think anyone would have even seen coming, I won't say anymore on this as I just don't want to spoil the surprise.

This set is a bit light on extras, in fact I would have liked to have seen it bundled with maybe the Doctor Who Confidentials, but maybe they are saving that for the complete series box set...

An astonishing series revealing the extraordinary wildlife and dramatic landscapes of one of the world's most bizarre islands. Lying just off the coast of Africa, Madagascar is a land of misty mountains, tropical rainforests and weird spiny desert scrub. Here, the wildlife has evolved in splendid isolation to become strange and totally unique.

The series captures, sometimes for the first time, the diverse and rare wildlife that ... more...