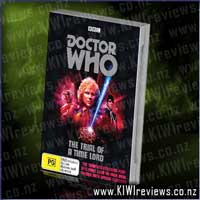 Disclosure StatementFULL DISCLOSURE: A number of units of this product have, at some time, been supplied to KIWIreviews by Roadshow (NZ) Ltd or their agents for the purposes of unbiased, independent reviews. No fee was accepted by KIWIreviews or the reviewers themselves - these are genuine, unpaid consumer reviews.
Available:
February 2009

Doctor Who - The Trial of a Time Lord product reviews

BBC DVD is proud to announce the release of the entire classic series 23. Featuring Colin Baker as the sixth Doctor and Bonnie Langford as his new assistant Mel, this thrilling series draws inspiration from Charles Dickens' 'A Christmas Carol'.

When the TARDIS is drawn towards a space station, The Doctor finds himself subject to a Timelord inquiry into his behaviour. His charge is transgressing the First Law of Time, which forbids interference with outside worlds. In making his case, the prosecutor draws evidence from three different stages of the Doctor's life - past, present and future. Should the Doctor be proved guilty then his fate will be to sacrifice all of his remaining regenerations.

Doctor Who: The Trial of a Timelord guest stars Brian Blessed, Joan Sims and Honor Blackman.

Special Features include:     •  Commentary's - With actors Colin Baker, Nicola Bryant, Tony Selbym, Adam Blackwood & various directors and crew.
•  The Making of The Mysterious Planet - cast and crew talk about the production of this story. With actors Colin Baker, Nicola Bryant, Michael Jayston and Tony Selby, script editor Eric Saward, visual effects designer Mike Kelt, composer Dominic Glynn, TV historian Jim Sangster and writer Clayton Hickman.
•  Deleted and Extended Scenes - scenes cut from the story before transmission.
•  35mm Film Sequence - the full-length version of the impressive motioncontrol model shot that opened the story. (Mute)
•  The Making of Mindwarp - cast and crew talk about the production of this story.
•  Music Videos - three music videos with the option of various soundtracks, requires own menu to select the soundtrack. These should also be surfable on the viewer's remote.
•  Wogan - Colin Baker and Lynda Bellingham appear on the Terry Wogan show in August 1986.
•  Lenny Henry - Lenny Henry is the Doctor in this comedy sketch from his series.
•  The Lost Season - The story of the plans for the original season 23, which was dropped when the series was rested following transmission of 'The Trial of a Time Lord'.
•  Children in Need - Colin Baker, Nicola Bryant and producer John Nathan- Turner visit the Blackpool Doctor Who Exhibition.
•  Trials and Tribulations - A documentary looking at Colin Baker's tenure as the Doctor, a particularly turbulent era in the show's history.
•  Blue Peter - presenters Mark Curry and Janet Ellis talk to Colin Baker, Bonnie Langford and the designers and operators of the L1 and L3 robots, whilst Peter Duncan interviews the villainous Sil, played by Nabil Shaban.
•  Points of View - Anne Robinson responds to viewer's letters on the Doctor's return.

Also includes Photo Galleries, Programme Subtitles, Trails and Continuity plus much, much more.

The original airing of this season was a rather historic and even foretelling event in the history of Doctor Who, firstly it is historic as it was it's first time back after being put on hiatus for a year (a break that many felt it would not come back from), and also for being the first time that a backstory would be told over an entire season. This is also where the foretelling comes in as this is now common place in the new Doctor Who series beginning from the Ninth Doctor and the whole "Bad Wolf" backstory.

This unique attempt at Doctor Who storytelling was probably part of what save it from being scrapped completely, but it was by no means the only reason. The other main reason has to be the four compelling individual stories that make up the whole season backstory.

This season saw many changes and also revealled more of the Doctor's story. Of course one major change was the leaving of Peri and the introduction of Mel, a swapping of chalk for cheese one might say. I actually never really liked Peri too much as a character as she seemed to be there mainly as a bit of an antagonist to the Doctor, however there are some great scene in this series where we see Peri and the Doctor actually getting on which was a nice way to say goodbye to the character.

I am one who is glad that the wise folks at the BBC decided to release this as an entire box set and not individually as they are doing for many of the other earlier series.

For any classic fan of The Docotor, this is a holy grail indeed. Not only it is an entire season in itself, but it is one epic storyline spread across 14 parts! What a mission.

At a time when the franchise series was facing popularity issues, and possible cancellation, the storywriters had to come up with something novel that would grab the minds of the BBC bigwigs and drag from their dusty coffers enough funding to continue production a while longer. This they managed with a style and typical dry British wit that I find utterly engaging.

The storyline itself is not only something novel for the era, but also a way of reminding the viewers of The Doctor's past exploits and hinting that the very future of the show was in the balance and needed their support. "Giving up all his future regenerations" was a punny way (sic) of saying "Either he lives on for season 24, or he dies totally!" of course, as we know, the franchise won the approval of all concerned and was granted another regeneration... 9 months later Season 24, espisode 1 went to air.

Packed full of some classic moments from the Doctor's past (of course, all new to us) the entire series is basically 14 episodes of joy for the fans. With faces that have become famous over the years before and since filming, there are plenty of those "Hey, isn't that..." moments, along with a few "Oh my god, is that...?" ones too... when you don't believe they *ever* looked *that* young!

Overall, one of the best season-wide boxed sets, and because of the very nature of the story, there's no way they could justify splitting it up and selling it piecemeal. Packed full of extra and bonus features that are sure to tittlate the classic fan's palette, it's worth every penny of the $70 pricetag.

Score: 9.3
Product reviews for listing 4036: Doctor Who: The Ark in Space -  Type of Show: Science Fiction

The TARDIS lands on a space station orbiting Earth in the distant future. It's seemingly deserted, but the Doctor, Sarah and Harry soon discover that they are not alone.

Thousands of humans are in cryogenic sleep, and while they've slept their Ark has been invaded. A parasitic insect race - the Wirrn - have taken control and threaten the very future of mankind...