Doctor Who - A Christmas Carol review

ProdID: 2850 - Doctor Who - The Mutants
Type of Show: Science Fiction 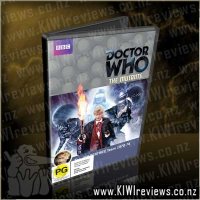 Disclosure StatementFULL DISCLOSURE: A number of units of this product have, at some time, been supplied to KIWIreviews by Roadshow (NZ) Ltd or their agents for the purposes of unbiased, independent reviews. No fee was accepted by KIWIreviews or the reviewers themselves - these are genuine, unpaid consumer reviews.
Available:
Now

Doctor Who - The Mutants product reviews

Featuring fan favourite John Pertwee in his role as the third Doctor and packed with a wealth of un-missable extras.

The Time Lords send the Doctor and Jo on a mission to deliver a sealed message pod to an unknown party aboard a Skybase orbiting the planet Solos in the 30th century.

Solos is due to gain independence from Earth's empire but its Marshal is determined to prevent this. He arranges the murder of the Earth Administrator and, with his chief scientist Jaeger, plans to transform Solo's atmosphere into one more suited to humans.

Ky, a young Solonian leader, is falsely accused of the murder and flees to the planet, taking Jo with him. The Doctor follows and joins them in an old thaesium mine. Ky turns out to be the intended recipient of the message pod, which opens automatically for him. Inside are stone tablets carved with ancient inscriptions.

As most visitors to this site will know I am a Doctor Who fan (actually I'm more a fan of good science fiction) - I have been since I first saw Doctor Who on the TV here in NZ, back in the late 70's. Unfortunately for me I only saw a few of the Jon Pertwee stories in reruns, and I don't actually remember seeing this one, so this was a first time viewing for me.

As with most of the current releases of the older Doctor Who serials this has been through the digital picture and sound remastering process, unfortunately it seems the source material for the first two episodes had to undergo a further process than the last four and so they don't seem as improved as the last four in the picture quality department, but still a major improvement on the originals. The sound of course is now nice and crisp.

The story, whilst not being one of the better ones, was still enjoyable and I felt some of the make-up effects were particularly well done and even seemed better than some of those that came in later series, but that could just be my bad eyesight

The extras with this 2-disc set include the obligatory audio commentary with some of the stars (unfortunately without Jon Pertwee who passed away in 1996). We have a look at the making of the serial with Mutt Mad. Race Against Time - this documentary is hosted by Noel Clarke (Mickey Smith from Season 1-4 of the new Doctor Who), and looks at how non-white actors were represented in Doctor Who and British TV as a whole back in the 1970's. This alone is quite an interesting piece. Another item looks at Academy Award winning costume designer James Acheson's time on Doctor Who and some of his memories. Now this may sound dull, but it wasn't quite as bad as I thought it would be and it's only 27 minutes long.

So while not the best Doctor Who story out there, it's still a good view.

Well regarded by fans as possibly the best series yet, the Doctor faces deadly foes including the Daleks and his arch-nemesis the ... more...