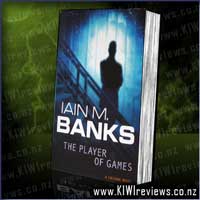 The Player of Games product reviews

The Culture - a human/machine symbiotic society - has thrown up many great game players, and one of the greatest is Gurgeh. Jernau Morat Gurgeh. The Player of Games. Master of every board, computer and strategy.

Bored with success, Gurgeh travels to the Empire of Azad, cruel and incredibly wealthy, to try their fabulous game... a game so complex, so like life itself, that the winner becomes Emperor. Mocked, blackmailed, almost murdered, Gurgeh accepts the game and with it, the challenge of his life - and very possibly his death.

I am REALLY starting to love this guy's works... the level of detail is stunning, and I really love the way the machine intelligences adopt such an ironic sense of humour when it comes to dealing with their slower, squishier symbionts... or pets... depending how charitable you want to be towards the human part of the equasion.

Now, I have been known to play the odd game or three in my time, and I can usually make a half-decent account of myself after a bit of practice... but wow... this game Azad left me wishing we had the technology to take it out of the book and into reality, because I would LOVE to give it a go. It seems to have elements that remind me of games like 'Risk' and 'Chess', as well as strategic similarities to Cathedral and Stonewall, but taken to a whole new level... heck, a whole new universe.

Though the greater majority of the book is dedicated to Gurgeh's time in the Azad Empire, there is enough at the start and end to give you an idea of the habitations within the Culture, and I must say I was rather impressed with the description of Gurgeh's 'homeworld', an Orbital. Think of a series of flat plates, each with a surface area larger than Europe, linked in a looped chain, spinning around like a hula hoop. For the old-school amonogst you, think Larry Niven's Ringworld, or for the younger set, think Halo without the aliens and guns.

I found myself stunned at how Banks took examples of humanity's inhumanity and reflected them in the aliens Gurgeh deals with. How he takes the concept of the dichotomy of Rich Minority vs Poor Majority and clearly illustrates how the rules apply only to the masses, how the rich create their own rules, their own pleasures, usually at the expense of the downtrodden. I always appreciate an author who tries to open our eyes without ramming it down our throats.

Overall, a highly enjoyable read, absorbing and entertaining. This title actually reminded me a lot of books by Neal Asher with a hint of Greg Egan for flavouring. If you are a die-hard sci-fi fan, you're going to love this guy's work... especially his later stuff!