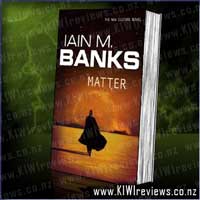 Disclosure StatementFULL DISCLOSURE: A number of units of this product have, at some time, been supplied to KIWIreviews by Hachette or their agents for the purposes of unbiased, independent reviews. No fee was accepted by KIWIreviews or the reviewers themselves - these are genuine, unpaid consumer reviews.
Available:
February 2008

In a world renowned even within a galaxy full of wonders, a crime within a war. For one brother it means a desperate flight and a search for the one - maybe two - people who could clear his name. For the other brother it means a life lived under constant threat of treachery and murder. And for the sister, even without knowing the full truth, it means returning to a place she'd thought abandoned forever.

Only the sister is not what she once was. Djan Seriy Anaplian has changed almost beyond recognition, to become an agent of the Culture's 'Special Circumstances' section, charged with high-level interference in civilisations throughout the greater galaxy.

Concealing her identity, and her particular set of abilities, might be dangerous strategy, however. In the world to which Anaplian returns, nothing is quite as it seems, and determining the appropriate level of interference in someone else's war is never a simple matter.

I have never read the other books Iain M Banks' culture series but this one started out with great promise. Despite not being a science fiction reader (in general) I was drawn into the world surrounding these three young royals, Djan Seriy a member of the culture since a young age, with her absolutely adorable drone, her younger brother Fabin, newly heir to the throne and running for his life, and Oramin, youngest prince, trying to make the most of his sudden and unexpected rise to power. They seemed interesting people, worthy of caring about - for the most part at least.

But as the story wore on, there were more and more pages devoted to description of things barely relevant to the central characters, whole chapters about species I was struggling to imagine with names I couldn't pronounce. Exhausted, I kept putting the book down and procrastinating about picking it up again.

Despite all that, I found the concept of 'Shell worlds' (worlds layered in progressive shells) quite fascinating; definitely a highlight of this story. Many of the other ideas presented were also fresh and original (at least from my limited SciFi experience), I just found it difficult to wade through them in some places because I was preoccupied with wanting to know what happened to the characters.

By the time I got to the final quarter, I was skim reading and so the ending came as quite a shock and I had to go back and read properly to find out if it was justified. It was.

Still, Matter is not a book I would try reading again. I love character too much to accept its sacrifice for the sake of scientific ideals. If, however, you enjoy hard science fiction with a good splattering of gore and names starting with the letter 'X' then this is a most excellent book and I highly recommend it.

Oh how I love Iain's 'Culture' series of books. I love the way the AI's are (quite literally) lightyears ahead of the humans, and yet it's the humans who end up having to save the day. OK, so there's usually a few drones with seriously nasty but effective weapons hanging around to give the big nasties a bit of a sting, but it's usually the humans doing the gruntwork.

In this tale, the main characters aren't exactly the key ones. This added quite a twist to the tale, as you kind of expect to be following the story of the key players, not the ones whose job it is to save the key players' butts from some serious whuppings, and those who have no destiny but to die. In anonymity.

Overall, the vivid characters, the intrigue, the sheer unexpectedness of the climax really impressed me. The twist at the end took me quite by surprise, even though in hindsight the clues were there, but they were so casually thrown into the story that they didn't seem to be more than singular items of unrelated datum. For those who enjoy a good fast-paced sci-fi tale with a serious mind-bender puzzle thrown in for good measure... this is a good book for you!