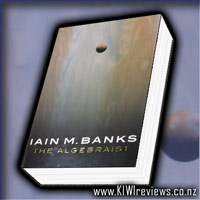 Disclosure StatementFULL DISCLOSURE: A number of units of this product have, at some time, been supplied to KIWIreviews by Penguin Random House or their agents for the purposes of unbiased, independent reviews. No fee was accepted by KIWIreviews or the reviewers themselves - these are genuine, unpaid consumer reviews.
Available:
December 2004

It is 4034 ad. Humanity has made it to the stars. Fassin Taak, a Slow Seer at the court of the Nasqueron Dwellers, will be fortunate if he makes it to the end of the year.

The Nasqueron Dwellers inhabit a gas giant on the outskirts of the galaxy, in a system awaiting it's wormhole connection to the rest of civilisation. In the meantime, they are dismissed as decadents living in a state of highly developed barbarism, hoarding data without order, hunting their own young and fighting pointless formal wars.

Seconded to a military-religious order, he's barely heard of - part of the baroque heirarchy of the mercatoria, the latest galactic hegemony - Fassin Taak has to travel again amongst the Dwellers. He is in search of a secret hidden for half a billion years. But with each day that passes, a war draws closer - a war that threatens to overwhelm everything and everyone he's ever known.

As full of twists and kinks as the atmosphere of the gas giant it is set in, this one really got my attention. After reading Excession by this author a few years ago, I was struck by how just how believable his rendition of how a machine-mind might think was. After all, how WOULD an A.I. machine really think and processess information. How would it prioritise it's efforts, etc?

I was struck by how well Iain fleshed out the characters, filling in ther past (in a series of rather jolting flashback, but it did the job) and going to great lengths to describe the minutae of the alien species, right down to the smaller differences between various members from each. This made it a lot easier to keep track of who was with who, when, and under what circumstances.

With detailed descriptions of all the technology used in the story, and often little background comments on each, the whole world was well-defined in my head when the big crunch came at the end, making sure that the punchline was still a surprise, but not a difficult one to accept, set as was in a detailed and coherant context.

Overall, I was again impressed with Iain's style and total committment to making every story everything it can possibly be, without compromising anything in the way of character strength and coherancy. There were no holes in this story, and a stunning twist at the end was hinted at with such a deleicate touch that it never even started to pull together until right when it would have maximum impact. Right until the end you think you have it all, only to find that one key piece was not in your mental image, vital to locking the whole thing together.

Benji is offered the chance of his dreams - to skip school and become a pirate for a day. But after battling sea monsters and searching for haunted buried treasure, he discovers that being a good pirate requires just as much learning as school.