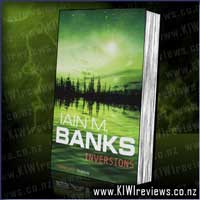 In the winter palace, the King's new physician has more enemies than she at first realises. But then she also has more remedies to hand than those who wish her ill can know about.

In another palace across the mountains, in the service of the regicidal Protector general, the chief bodyguard, too, has his enemies. But his enemies strike more swiftly, and his means of combatting them are more traditional.

I have great respect for Iain M. Banks' writing ability... his Culture books are stunning beyond anything I could imagine... yet he has also written lots of non-Culture series titles, this being one of them... and I have to say I can't quite get my head around most of them.

I found this book to be, basically, a pile of loose ends still unexplained at the end of the book. There were a lot of implied elements, such as the nature of Doctor Vosill's old blunt dagger, and the connection between the doctor and chief bodyguard... plus a heck of a lot of pop-up surprises, such as the true background of royal concubine Perrund. I was left with the distinct feeling that the book wasn't finished and that there should have been at least 2 more chapters that tied it all up neatly...

Overall... though I enjoyed the reading, I didn't really get much pleasure from the book. It ended abruptly, almost as though Iain had reached the publication deadline, hadn't really figured it all out, so slapped a cap on the end and left it at that. Not the best example of his usually-stunning literary style, despite it's own merits.

As you might imagine, Simon and Dame Alison Holst have quite a number of slow cooker recipes to choose from! With four best-selling books on the subject already, you might wonder why they felt a fifth was needed?

The answer is simple, as the series name suggests, "Everyday Easy Slow Food Fast" has recipes chosen especially because they are very easy and very quick to prepare. The 'throw and go' recipes can be prepared in ... more...