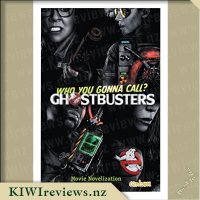 If there's something strange in your neighbourhood, who you gonna call? Ghostbusters!

Strange things have been happening in New York City. Mysterious ectoplasm has been oozing down walls, haunted figures are bursting out of locked rooms, and - rumour has it - a supernatural superfan wreaked havoc at a recent rock concert! Luckily, there's a group that's ready to take the lead and rid the city of its ghostly infestation - the Ghostbusters! Grab your proton packs and join the Ghostbusters in this hilarious, action-packed retelling of the all-new movie!

Initially I requested this book for my seven year old daughter as she has been begging to see the new Ghostbusters movie. The problem is she is not as brave as she likes to think she is and I am very concerned at how she will handle the movie. So along with her approval I requested the book in the hope we could read together and I could gauge her reaction and make the decision from there. Only problem is, we are currently reading another review book and still have a couple more chapters to read so I jumped ahead and read myself and will carry out the plan with her once able to.

Growing up with the original Ghostbusters I was very torn when I saw the new movie, remakes are never any good and especially when you throw in a completely new cast and in this case it was girls. I had assumed it was the same story but was pleasantly surprised it was not and differs completely. Actually, after reading this I am now dying to watch the movie. The book basically (I am assuming) tells the movie plot in such a basic way it is very easy to understand.

Aimed at the younger readers it is not hard at all and the words are nice and simple also the chapters are not very long which will be great for my daughter. As I know Melissa McCarthy is in the movie I could tell instantly what character she was and I could basically hear her saying the lines. It sounds just like her and I could imagine her visually as well. In the middle of the book are a couple of pages of pictures from the movies and I could easily guess who was who and from there on I could put the face to the voice.

I loved at the bottom of each page next to the page number is a picture of the Ghostbuster and on the other side is a picture of a ghost. It is very cute and adds to the story. I know there are cameos in the movie and reading the story you unfortunately miss who they are. I had heard the original cast make a guest appearance I am only guessing it is at the end but the book doesn't give that information away.

A very fun story with not as many ghosts making appearances until the end. A reasonable plot line and one that makes you want to see it visually. I am sure my daughter will be able to cope with this book with not much help at all. If you are a Ghostbuster fan and for such a reasonable price I would definitely recommend this book for you. Perfect for the younger readers in the house.

From start to finish, this book is pure fun! It is intended for seven-to-ten-year-olds, so I borrowed my friend's eight-year-old and we had a hilarious time reading it together. Some of the more subtle humour went over her head, but she got most of it, and both of us agreed firmly that we have just got to see the movie now! It took us nearly three hours to read through to the end; it should have taken less time but we kept stopping to discuss the story so far and to analyse the different characters' motivations.

The "novelisation" actually comes after the film, not before it, but I don't think that matters. As a standalone story it works really well in that the content is pitched at the right level for the target audience (she did most of the reading while I listened), and it encourages kids to read which in itself is a measure of success. I like the way that the little graphics at the bottom of each page show the ghostbuster chasing the naughty ghost away, while the full colour illustrations in the middle of the book are an indicator of what the actors in the film actually look like.

The characters are fascinating. The original Ghostbusters movie plot is revamped with female protagonists, and the situation is updated to embrace modern technology. But the idea of good vs evil has not changed, and the references to essential components such as ectoplasm and proton packs are still there. Our favourite character was the unfortunate Kevin who just didn't get it!

I asked Miss Eight whether or not she would recommend it to her friends. She was positive that she would give it the thumbs up because she liked the idea of girls being the heroes, and besides, she thought Kevin was really funny. She left clutching the book in her hand, assuring me as she went out the door that she was going to look at the pictures again when she got home. Oh, and when were we going to see the movie? Obviously that is the next step.