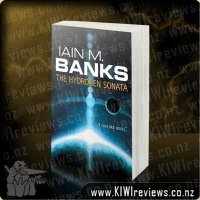 Disclosure StatementFULL DISCLOSURE: A number of units of this product have, at some time, been supplied to KIWIreviews by Hachette or their agents for the purposes of unbiased, independent reviews. No fee was accepted by KIWIreviews or the reviewers themselves - these are genuine, unpaid consumer reviews.
Available:
October 2012

The Scavenger species are circling. It is, truly, the End Days for the Gzilt civilization. An ancient people, organized on military principles and yet almost perversely peaceful, the Gzilt helped set up the Culture ten thousand years earlier and were very nearly one of its founding societies, deciding not to join only at the last moment. Now they've made the collective decision to follow the well-trodden path of millions of other civilizations; they are going to Sublime, elevating themselves to a new and almost infinitely more rich and complex existence.

Amid preparations though, the Regimental High Command is destroyed. Lieutenant Commander (reserve) Vyr Cossont appears to have been involved, and she is now wanted - dead, not alive. Aided only by an ancient, reconditioned android and a suspicious Culture avatar, Cossont must complete her last mission given to her by the High Command. She must find the oldest person in the Culture, a man over nine thousand years old, who might have some idea what really happened all that time ago. It seems that the final days of the Gzilt civilization are likely to prove its most perilous.

25 years ago, Iain M. Banks first ontroduced us to "The Culture" in the form of "Consider Phlebas" which I admit I haven't yet managed to track down a copy to read. However, since I first encountered his "culture" universe when I stumbled across a copy of "The Algebraist" I have been hooked, to the point of back-tracking copies of most of his other "Culture" titles and soaking them up. In this story, Banks has offered us a tiny insight into the Sublimed races, and how they interact with the mundane universe we dwell in. It brings new light to the title "Excession" which, at the time I read it, really didn't make a whole lot of sense.

Full of intrigue, political manoeuvring, betrayal, subterfuge, and a lot of "Ship Minds", this was a bit of a deviation from Bank's normal "Culture" stories, where a human Culture citizen or Agent is the main character. In this story, our protagonists are a member of a society on the verge of Sublimation, and a stack of Ship Minds trying to figure out the big deal about "The Book of Truth" - the holy book of the Gzilt, the society about to Sublime. Oh, and trying to uncover a dark secret that goes back 10,000 years to the very founding of The Culture itself. All of which revolves around a single individual who really doesn't want anything to do with anyone right about now.

When I first realised that this book was quite a radical shift off the usual run of Culture novels, I wasn't too sure how I was going to like it... Ship Minds are funny characters, following a logic so precise, yet based upon a set of rules I can describe only as "irreverently benevolent despotism towards anything organic" - which makes the story something hard to attach to at times. But if you stick with it, this is a gripping read and I certainly hope Banks has a lot more Culture novels to offer. I fervently hope that rumours that this may be the last are wrong. It would be a stunning end to the saga... but I would feel the loss keenly.

Overall, another excellent addition to the Culture universe, and an interesting new perspective that keeps this storyline fresh despite being set in a very well-established universe. I can only wonder what Banks will dream up next!