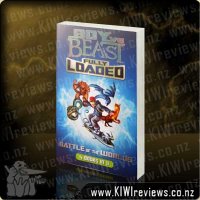 Four Books in One - Battle of the Worlds.

Kai Masters, BMC Border Guard must battle beasts to keep Earth safe. Join Kai as he takes on the beasts from the lands of Beastium.

Fully loaded is exactly as the title suggests, fully loaded with four books in one! and this really appeals to my son, it means he has four great reads but more space on his book shelf without having to have four books on there lol According to him, that is awesome.

This is the first four books in the series, like the others my son has read, it is easy to read and easy to understand, the print is large and easy to follow. The cover is colourful and interesting (especially for boys) and the story's are not drawn out and long. I often think this is important for boys as some can easily get bored when reading. I am impressed with these books though as my son was given four, including this one, and he read them all cover to cover in under a week. And he is reading them again, second time around. This definitely makes them worth every cent. Like the others this also lead to more imaginative play from my boys and I think that in itself is really awesome, especially in today's society.

This book introduces you to Kai, the main character in all the books as he must battle with beasts to keep the earth safe, and like the others it has everything boys could want in an easy to read, not to over-whelming story. And they led to further investigation from my boys who wanted to know what else there was out there in relation to these books. All in all an easy to follow, easy to read and appealing story line according to my son. I read the books in a day and so was able to sit and yarn with my oldest son about them when he had finished them the first time also, which was great. My youngest boy is not a very accomplished reader but even he has enjoyed reading through these ones at his own pace. We highly recommend these books for boys who are struggling to grasp the whole reading buzz, and think they are also a good reading learning tool.

Fully Loaded is a the first four books in the Boy vs Beast series, rolled into one book. Despite it's size, it was actually a quick read. It probably only took me an hour.

The reason for the speed was that each page has big print words, short simple sentences and plenty of illustrations. This book could easily be a reading book for a new but confident reader.

I've read a couple of Boy Vs Beast books recently, but they didn't make a lot of sense to me. This is because they were so far ahead in the series. Reading Fully Loaded gave me an excellent overview of the main character, Kai. His back-story gets a lot more rounded and things I read previously now make a lot more sense.

I also enjoyed the stories a lot more in this volume. I found Kai a bit easier to relate to. There was time for a bit of humour too. Like all Boy Vs Beast books, they have a graphic comic story element in them at battle time for added excitement. The illustrations are in black and white. However, they are still dynamic enough to capture the imagination.

Price-wise, $21 for 4 books compared to $10 a book, makes this book great value. An excellent starter for the series.

Emily's dad is accused of murdering a teenage girl. She's sure he's innocent, but what did happen that night in the woods behind their house? The woods she played in as a child? Determined to find out - and afraid of what she might discover - Emily seeks out Damon Hillary, the boyfriend of the murdered girl. He also knows these woods. Maybe they could help each other. But Damon has his own secrets, about the games that are played in the dark ...