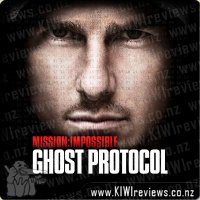 After being broken out of a Russian jail, Ethan Hawk and his new team are hot on the trail of a fanatic attempting to start a global nuclear war. When the IMF is shut down due to being implicated in the bombing of the Kremlin, Ethan and his new team to go rogue to clear their organization's name.

Maybe I put too much faith in Tom Cruise. Maybe I expected this to be so so amazing that I blanked out that Tom Cruise was starring and producing this film. Maybe I thought that J.J. Abrams' directing this would make it better than any reasonable person would have known... It's not that I have a thing about Tom Cruise in general (though if you do, best avoid this one as he does take off his shirt! Oh la la), but I do have an issue with someone having production rights AND starring roles in the same movie.

My verdict: Nope. just nope. Dear lordy, this was bad. The storyline simply made no sense. And the plot was simply bad. It is super difficult to get into a movie that is this bad.

If I had to find some redeeming points: the Dubai stunts and Jeremy Renner. Oh and the BMW cars - they acted better than Tom Cruise.

Having seen the previous three movies in this franchise, I really wasn't holding out much hope for this one. In fact, if it hadn't been for the need to use up some movie vouchers before they were about to expire, I think I would have skipped this one for sure - as it was, it was the only thing on the screening list that had even the slightest appeal in the timeslot I had available. I am very glad I decided that seeing this might have been a waste of time, but it was a better option that wasting the tickets.

Action, scenery, good acting (yes, even from Mr Couchtramp Champ himself), and a plot that was at once easy to follow but still not entirely predictable. (I did say not ENTIRELY...) Frankly, I was pleased to sit in the theatre - despite the rude couple behind me talking all the way through it - and watch this on the big screen.

Personally, my favourite scenes were "getting back into the hotel room" and "opening the train door" - if you have seen the movie you'll know the scenes, and if you haven't yet - you will recognise the bits I am talking about when they pop up.

Despite the huge errors in the story - which I can understand being purely 'literary licence' rather than sloppy research in most cases - the movie was easy to fall into and connect with.

A nice twist at the end, which was a clear set-up for the next movie and opening the door for a 'key character switch' at some point in the future, added a final aire of "Ooohhhh.... OK, more to come..." which I felt was so much more appealing than some tense, cliffhanger ending that leaves you disappointed and frustrated should the next movie never materialise. This was so much more "audience friendly" in my book I think they deserve major kudos just for being so considerate, and planning ahead 'just in case' scenarios.

Overall, this one movie has salvaged the reputation of the franchise for me... which is really saying something, considering how the previous three utterly tarnished the fond memories I carry for the original TV series. Today, they are a little shinier than before...

Is there anything Brad Bird can't do? Interest was certainly high when it was announced that the animation director would be making his live-action directing debut, choosing to tackle the third sequel in the Mission: Impossible film series. Brian De Palma's first, while it hasn't aged well, is a tense 70s style thriller, John Woo's M:I 2 increased the action but lowered the intelligence, and in 2006 JJ Abrams reinvigorated the franchise with the exciting and highly enjoyable M:I 3. But all of the previous films have been completely left in the dust by Bird's Mission: Impossible - Ghost Protocol, a strong contender for film of the year and perhaps one of the finest action films ever made. To have pulled off such a feat is somewhat remarkable for Bird. While certainly an immensely talented director (best known for The Iron Giant and The Incredibles, two films which would rank highly on any respectable list of greatest animated movies of all time), the ability to transfer his skills to live-action on the scale of M:I - GP with such flair sets him apart as a filmmaker with immeasurable gifts, and one of the most interesting directors working today.

So what is it about M:I - GP that works so well? Tom Cruise, returning as IMF agent Ethan Hunt, once again puts everything he's got into his role. This franchise is clearly Cruise's baby, and the famously passionate star characteristically doesn't shy away from the more perilous stunt work. The level of commitment shown by Cruise is staggering, whether he's clinging to the side of the worlds tallest skyscraper (130 floors up!), or throwing himself down several levels of a parking garage. Say what you will about his eccentricities, but the man takes a pounding at every turn of this film only to rise and face down the next challenge, the very definition of a fearless performance. Also of note is Simon Pegg making a welcome return in a much larger role than the last film, and his wisecracks and facial silliness provide much needed relief from the relentless suspense of the narrative. The story is somewhat familiar as Ethan and his team fight to stop a psychopathic genius (Michael Nyqvist) hell bent on starting world war three, but what could be a fairly standard affair in less capable hands is turned into something wonderful by Bird.

As you can probably gather, the real star of M:I - GP is Brad Bird. From a dialogue perspective, the film is surprisingly minimalist, as the director boldly lets his spectacular visuals speak for themselves, rather than relying on too much exposition from his characters. Likely because of his background in animation, where the visual style comes literally from the hands of the artist, Bird's compositions and framing are so meticulously crafted, particularly in some of the more pulse-pounding set pieces. The aforementioned skyscraper climb is one of the most exciting sequences I have ever seen in a film, but it's merely one of several fantastic scenes constructed by Bird and his team. Even in the quieter moments, seemingly unimportant small gags (Hunt shedding a disguise for example) add so much to the film, like the delicate icing on a huge, many-layered cake. As welcome as a new animated film from Bird would be, the astounding quality of M:I - GP suggests that anything he chooses to do from this point will be hotly anticipated. Whether his Pixar compatriot Andrew Stanton can pull off the same transition with next year's John Carter remains to be seen, but for now, Brad Bird seems to be a director who can do no wrong.

Goaded by his buddies, a nerdy guy who's never "done the deed" only finds the pressure mounting when he meets a single mother.