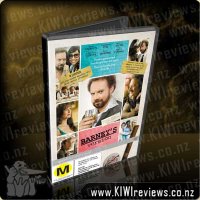 Based on Mordecai Richler's prize-winning comic novel - his last and, arguably, best - Barney's Version is the warm, wise and witty story of Barney Panofsky, (Paul Giamatti), a seemingly ordinary man who lives an extraordinary life.

A candid confessional, told from Barney's point of view, the film spans four decades and two continents, taking us through the different "acts" of his unusual history. There is his first wife, Clara, (Rachelle Lefevre), a flame-haired, flagrantly unfaithful free spirit with whom Barney briefly lives la vie de Boheme in Rome. The "Second Mrs. P.", (Minnie Driver), is a wealthy Jewish Princess who shops and talks incessantly, barely noticing that Barney is not listening. And it is at their lavish wedding that Barney meets and starts pursuing, Miriam (Rosamund Pike), his third wife, the mother of his two children, and his true love.

With his father, Izzy (Dustin Hoffman) as his sidekick, Barney takes us through the many highs, and a few too many lows, of his long and colourful life. Not only does Barney turn out to be a true romantic, he is also capable of all kinds of sneaky acts of gallantry, generosity, and goodness when we - and he - least expect it. His is a gloriously full life, played out on a grand scale. And, at its centre stands an unlikely hero - the unforgettable Barney Panofsky.

Appropriately, for a film very much about the passage of time, Richard J. Lewis' BARNEY'S VERSION takes its time getting its hooks into you. Detailing the adult life of Barney Panofsky (Paul Giamatti), the film is a slow-paced and melancholic reflection piece, a character study of memory and how our interaction with the past leads us to the present. It's unfortunately a film that has been largely overlooked, but is certainly well worth your time.

Telling the story largely in flashback from a character's memory, Lewis invites us to question and scrutinise what we are being shown. Indeed, as the title of the film suggests, what we are seeing is very much Barney's remembered version of events. Yet memory is such a subjective thing, and with slowly decreasing subtlety leading up the devastating final scenes, Lewis makes it clear that perhaps Barney's version is not necessarily what really happened. Certain elements just don't seem to fit, and it's impossible not to see flaws in Barney's recollections.

The film itself isn't perfect either. There is a significant amount of time dedicated to Barney's second marriage to Minnie Driver's character, an incredibly unlikeable character serving no purpose other than to present an awkward situation for Barney to meet the true love of his life, Miriam (Rosamund Pike). Similarly, the mysterious disappearance of Barney's best friend Boogie (Scott Speedman), while seeming at least initially to be an important aspect of the story, is left to linger and suffers from a clunky, tacked on resolution. Lewis clearly wants us to see these moments as parts of Barney's constructed past, born from guilt perhaps, but they could have been handled better. However, in spite of its flaws, the film succeeds chiefly for one reason: the masterful performance of Giamatti.

Much like the film itself, Giamatti's performance is a slow burn. For the majority of BARNEY'S VERSION, it's fairly typical work from Giamatti, an actor who has the bitter, cynical middle-aged man role down with such precision to the point of almost becoming typecast clichĂ ©. He's not an easy character to empathise with, as early on his memories seem to remove himself from any responsibility for the various tragedies that occur, yet something about Barney grows on you. Lewis slowly introduces things which suggest Barney is not the awful person that he thinks he is, and it's not until the end that the brilliance of Giamatti's performance can truly be understood and appreciated. For anyone interested in how a gifted actor crafts a character, BARNEY'S VERSION demands multiple viewings to study Giamatti, in arguably his finest performance, and his skill at leading audiences down one path, only to completely change tone at the crucial moment with heart-breaking results. There is excellent support from Dustin Hoffman as Barney's eccentric father, and a wonderfully graceful performance from Rosamund Pike, but the film belongs completely to Giamatti.

BARNEY'S VERSION is not going to be for anyone. It's slow, and borders on being a little melodramatic at times, but worthwhile to see some of the absolute best work by an actor in recent memory.

In the mid-1970s, charismatic English playboy James Hunt (Chris Hemsworth) and Austrian perfectionist Niki Lauda (Daniel BrĂĽhl) share an intense rivalry in Formula 1 racing. Driving vehicles that are little more than gas-filled, rolling bombs, Hunt and Lauda burn up the track, all the while pushing themselves to the breaking point of physical and mental endurance. Meanwhile, the women (Olivia Wilde, Alexandra Maria Lara) in their lives can only watch as both drivers risk death with every lap.