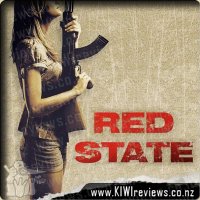 Set in Middle America, a group of teens receive an online invitation for sex, though they soon encounter fundamentalists with a much more sinister agenda.

While some would argue that a truly great filmmaker has to be able to adapt their skills to almost any story, certain filmmakers seem to work best by locking themselves into a singular style, which they merely tweak here and there with each new film. For the last two decades, no director has been a better example of the latter type than Kevin Smith. To describe the type of films he makes, perhaps the simplest description is this: he makes 'Kevin Smith movies'. Low-budget, dialogue heavy low-brow comedy is his bread and butter, and on the few occasions where he's deviated from his formula (2004's Jersey Girl, 2010's Cop Out), the results have been mixed at best. With Red State however, Smith smashes all preconcieved notions about what he is capable of as a director, delivering an intense, fast-paced thriller. Red State feels like a film from an ambitious first time director, and in a sense it almost is. This is not a 'Kevin Smith movie', and precisely that reason makes it Smith's most interesting film in years.

That's not to say that Red State is a great movie, or even a good one. The story begins with three teenagers lured into temptation and subsequently captured by the Five Points Church, an extremist religious group led by the charismatic Abin Cooper (Michael Parks), and builds to a Branch Davidian style standoff between the church and authorities. Drawing comparison with David Koresh's tragic cult and, most obviously, the Westboro Baptist Church was clearly Smith's intent, yet he makes it clear that Cooper is neither Koresh nor even Westboro leader Fred Phelps. Cooper and his family are the terrifying extreme of two of right-wing America's most dangerous fascinations: faith and firearms. It's certainly inflammatory subject matter, yet Smith chooses to point the finger even further, implicating not only Cooper's warped ideas in the violence that occurs, but the authorities, in the form of the ATF, as well. The issues Smith wants to address are ripe for analysis, but having them all crammed in to a relatively brief 88 minutes unfortunately dilutes some of the film's impact. Red State's conclusion is also sure to divide opinion, as Smith himself seems to be unsure how to end the siege at the church and resorts to a ham-fisted 'deus ex machina' ending that kills the suspense he built so well.

There are moments of greatness in Red State however. Parks' performance as Cooper is captivating as much as it is frightening, and the long sermon he delivers in the middle of the film is genuinely chilling. Just like a church member who stares raptly as Cooper quietly and calmly lectures on the evils in society, you just cannot take your eyes off Parks, a perfect piece of casting. Technically, Smith's direction is also something of a revelation. Never before has it seemed like he was even attempting to inject any dynamic style into the look of his work, yet with Red State Smith seems to be approaching film as a visual medium for the first time, with surprisingly competent results. How people feel about this film is likely to depend on how attached they are to Smith's usual style, but for viewers interested in seeing a director break out of their mold and really try to push their abilities, Red State has plenty to offer. Whether or not he continues to experiment with his next (and potentially final) film, the two-part hockey story Hit Somebody, it's refreshing to see that there's more to Kevin Smith's talent than he has previously shown us.

Valiant, an eager young wood pigeon, flies to London to join the Royal Homing Pigeon Service, dreaming of becoming a hero! He is joined by a group of misfit pigeons ... more...