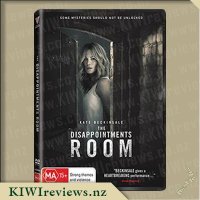 Disclosure StatementFULL DISCLOSURE: A number of units of this product have, at some time, been supplied to KIWIreviews by the company for the purposes of unbiased, independent reviews. No fee was accepted by KIWIreviews or the reviewers themselves - these are genuine, unpaid consumer reviews.
Available:
at online and physical retailers

Dana (Kate Beckinsale), her husband David and their 5-year-old son Lucas start a new life after moving from the hustle and bustle of Brooklyn, N.Y., to a stately old manor in the quiet countryside. After settling in, Dana starts to experience terrifying visions and dreams that she cannot explain. The mystery grows when she stumbles upon a secret room in the attic. After finding the key and unlocking the door, Dana discovers the dark history of the family that lived there in the 19th century. This movie is called The Disappointment's Room, and to be honest, I think any room that someone watches this film in, will become a room of disappointment. Simply put, I was incredibly disappointed and wouldn't recommend it at all. If you really want more details then read on...

The movie is around 80 minutes in length, but feels a lot longer. I attempted to watch it on four separate occasions, but had to stop because I didn't really know what was going on anymore. I assumed that it was because of poor lighting (watching it on a projector during the day), or I was too distracted by other things (txting, or distractions from the flatmate etc.). But when I finally sat down, and watched it from start to finish, without any distractions, I was bored. I frequently had to check how much time remained on the film, and was subsequently confused by how far through the film I had progressed, and yet the plot hadn't been found yet.

The plot itself is incredibly convoluted and poorly written. Despite being called The Disappointment's Room, the film is based more around the protagonists past, than it is on the room in question. In fact, I don't even know if the room actually did anything at all. The characters arrive at this house, and they leave in the same state. They were traumatised before, they were traumatised afterwards, but no progression. No character development. There is no obstacle that they must overcome, there is no epiphany, or defining moment.

The characters themselves were odd. I usually love Kate Beckinsale (Underworld is one of my favourite film franchises), and yet she has no chemistry with any of the other cast, not her son, not her husband, not the young man that keeps hitting on her for some reason. There are no real emotions on display, and it really makes you struggle to empathise with any of it. If that was the goal, to display an emotional disconnect due to past traumas, then congratulations? If that's the case, they succeeded, but the film suffered because of it.

The "true" story behind the disappointment's room, is a sad story. And it is something that I could connect with on a human level, but there was nothing overly malicious about it. Nothing that lends itself to a horror. A strange lady with old newspaper cutouts and an old rotary phone doesn't make it scary. It's just sporadic storytelling, provided in a chopped up, blurry fashion to try and make it seem scarier than it is. Unfit for a horror story unfortunately.

It had all the tropes that you would expect from a horror; the creepy house, in the middle of nowhere, the dark backstory, but in the process of trying to weave in some weak character development, they've forgotten to actually put in a threat. There are scenes that give the illusion of a threat, but the limited cast and over-the-top nature of the threats made it obvious what was actually happening. They really needed to take it a couple of steps further, to play on Beckinsale's character's mental health, and they could have made it into a reasonable horror.

Camera-wise, it looked nice. Kate Beckinsale is a woman that I find very attractive, so I enjoy looking at her, the scenes were nicely framed, and there was nice greenery and environments. These didn't save it from the fact that nothing was happening on screen. A lot of the footage could be used for advertising, it is that generic and plotless. High production values, but the content was very much lacking.

As it stands, there were no scares, I got bored and struggled to finish the movie on several occasions, I didn't care about any of the characters, and the two story arcs were practically completely independent of one another apart from occupying a common space.

As he tries to figure out why he survived and tries to deal with people in his town, like the ... more...