« Doctor Who: The Ark in Space review 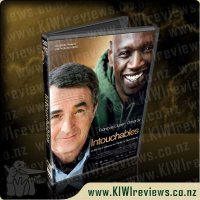 I haven't watched many films that are subtitled, in fact, I think The Intouchables is my first foreign, subtitled movie ever.

My wife really wanted to see this, she'd seen the trailer a couple of times on DVDs that we had borrowed and so one trip to the video store and this was one of her picks. We invited my mother in law to watch it with us, and I, expecting not to enjoy it, settled down with our tablet to play on. The story is based upon the real life friendship between a millionaire paraplegic and the man he hires to care for him. A trial for one month turns into a friendship that not many would expect.

I have to be honest in that I did find it a bit hard to follow, especially at times in the movie where they were talking at a fast pace, in English it's hard enough to follow a fast pace scene at times, but throw in a language that I don't know and the need to read the subtitles had me a bit left behind but luckily my wife and mother in law were able to fill me in when needed.

I enjoyed this more than I thought and would be happy to watch this again.

I've always enjoyed watching films in a language other than my own. I find it just as easy to loose myself in it,and if the film starts off good think am more engrossed in it than I would be an English film, simply because I have to read the subtitles if I want to know exactly what is going on. Having been to many subtitled films when I was growing up, yet having a husband who can't read well, means it has been a while since I have watchers a foreign film, but the first time saw the trailer I knew this was one I had to see.

The story is based upon the real life friendship between an eccentric millionaire paraplegic and the man he hires to care for him. Drissel has just done a stint in jail and applies for the job with Phillipe simply so that he can continue to get his benefit. An agreement for a trial of one month turns into a friendship that no one expected.

The laughs in this film are infectious and I was so engrossed in it that I was sad when it was time for the credits to roll. This has broken box office records in France and is such a hit that an english version is apparently under way already. However, I highly recommend you watch this film, the actors are superb, the plot and music wonderful and overall this is one fantastic film, movie of the year.

Even better was that my husband really enjoyed this movie, even though due to his reading level, he couldn't follow all of it, there was enough for him to work out the general gist of things. I would love to own this on DVD.

When this was on at the theatres I wanted to go. It was showing at Lido. But my baby was just getting to the point where she wanted to watch some or all of the film. This makes an adult film like this a bit too much hard work. So I left it. I was very pleased to get the opportunity to see this at home recently though.

This is a film almost entirely in French. I knew that going into it, but I didn't "think" too much about it. I had to re-start the film twice because I was busy multi-tasking and missed whole chunks of the dialogue. Once I put the tablet away and focussed on the screen, I was transported to France and into the world of Driss a young, black guy who has a large family in a lower socio-economic area. We follow him on his journey, as he meets Philippe an incredibly wealthy guy who is stuck in a wheelchair.

Though the two are so different, they become fast friends and a lot of the movie is about each discovering the world through their friendship. There are sad moments, but there are also a lot of laughs. The two get up to some funny mischief and even the two guys I roped into watching this with me were laughing along to one scene involving a shave. My baby also sat very quietly taking in scenes where there were classical musicians playing. The French dialect also seemed to soothe her, though the language definitely earned the film its M rating. As long as you are prepared to read and to give it your full attention, The Intouchables is a totally worthy movie.

Everyone is buzzing for BEE MOVIE, the hit comedy from creator and comic icon Jerry Seinfeld. Ambitious young worker bee Barry B. Benson soars out into the world with the high-flying pollen jocks in search of nectar and adventure. But when he breaks one of the cardinal rules of beedom and speaks to humans, Barry sets off an un-bee-lievable chain of events that proves that even a little bee can make a big difference!