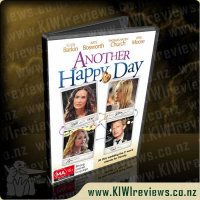 Winner of the Sundance Film Festival's prestigious Screenwriting Award, ANOTHER HAPPY DAY is the feature film debut of writer and director Sam Levinson. The film is a powerful, darkly comic story of a woman struggling to find her place in a volatile family dynamic and features an outstanding ensemble cast led by Ellen Barkin who also produced. A family weekend is fraught with emotional landmines for mercurial and sensitive Lynn (Barkin) as she arrives at her parents' Annapolis estate for the marriage of her estranged eldest son Dylan (Michael Nardelli), accompanied by her three younger children (Ezra Miller, Kate Bosworth, Daniel Yelsky). Lynn's hopes for a joyful reunion are crushed as her wry but troubled middle son Elliot (Ezra Miller) lobs verbal grenades at his mother and her relatives while daughter Alice (Kate Bosworth), fights valiantly to keep her longtime demons under control.

The weekend quickly unravels as Lynn demands to be heard by her aloof, disdainful mother (Ellen Burstyn), ailing, distant father (George Kennedy) and ever-judgmental sisters (Siobhan Fallon, Diana Scarwid), but most especially by her ex-husband Paul (Thomas Hayden Church) and his hot-tempered second wife Patty (Demi Moore). Confronted, oftentimes hilariously, with the deeply painful, half-buried truths that have given rise to the family's primal web of resentments and recriminations, Lynn struggles to maintain her equilibrium as her best attempts at reconciliation veer quickly off-course.

I was really looking forward to watching this movie and curled up on the couch anticipating an engrossing movie. Instead I ended up sitting on the couch knitting and cringing at the language and the at times what seemed appalling acting.

Although this is an R16 due to drug use and offensive language I hadn't expected the language to be quite as offensive as it was. At the beginning as the scene was being set for the storyline it was "f" this "f" that and other language that I wasn't so sure was actually necessary and was almost alienating. If anything the offensive language was indeed offensive and almost out of place in a way that detracted from the very powerful storyline and a drama that could have been told with a bit more taste and thus appealed to a much wider audience. The drug use on the other hand was necessary and didn't offend at all.

Demi Moore was brilliant in her role however Ellen Barkin's character wasn't developed quite enough for me to have any empathy with her at all. Whilst at times the story was indeed funny and you could actually imagine the whole story actually occurring, it was all just a bit cringing at times to watch. I really liked the development of the characters of Kate Bosworth and Ezra Miller and they definitely contributed to the overall success of the movie. The fight scenes between Demi Moore's character and Ellen Barkin seemed a bit over the top for the fact that they didn't seem to have had much contact in the past.

Overall this movie felt like it could have been so much better than it was. The script was good and the storyline brilliant and it should have been a top ten but it just didn't quite translate into a movie I would ever want to watch again.