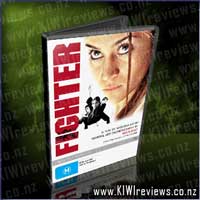 Her school coach, recognising Aicha's natural talent, suggests that she enlist in a local, elite level club - where the Iron Monkey himself, Xian Gao, is the sifu - to further her skills. There's just one problem: the club is mixed gender and Aicha's very conservative Turkish father will never consent to his daughter training in a space shared with boys.

A dark and beautiful film about the young Muslim girl, Aicha, addicted to Kung Fu and struggling to remain true to her family and her faith without giving up who she really is. One of the things I really admired was the skill with which the director approached an often difficult topic - being Muslim - without stereotyping or laying blame. Every character in this film came across as incredibly human. And best of all, Aicha is never compromised (or westernized) as a character, she always remains true to what she believes in.

I especially love the fight scenes in the movie. Plenty of slow motion, flips, wire work, all the beautiful Kung Fu we have come to expect from Xian Gao. That, combined with the visual story telling made this an art film grounded in a solid story.

One warning, if you do buy this DVD: It is in Danish and I found it a little difficult to find the subtitles (I had to use the remote subtitle buttom because I couldn't find an options menu on the main screen).

Still, I wouldn't have wanted this to be dubbed in English. There is something far more honest about hearing the actors say what they really mean, no matter what language it is in, and there are so many different languages portrayed in this film (Turkish, Chinese, English and Danish) that subtitles is the only way to get the genuine experience.

In conclusion, a beautiful film that had me thinking long afterwards...