The Cat in the Hat review 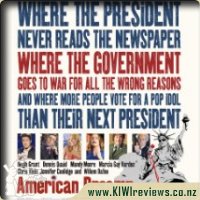 The new season of "American Dreamz," the wildly popular television singing contest, has captured the country's attention, as the competition looks to be between a young Midwestern gal and a showtunes-loving young man from Orange County. Recently awakened President Staton even wants in on the craze, as he signs up for the potential explosive season finale.

This, to me, is a total spoof on shows like American Idol. We have two main characters, a young American girl who just wants to be famous, and a young man staying with his family who ends up on the show by accident.

This movie goes into the behind the scenes workings of a famous TV show, which very much like American Idol, has contestants vie for places on the show, and slowly get voted off till there is one winner of American Dreamz. There are moments that are re-filmed, like the 'you've been chosen' moments, and things done to increase the drama, as any decent reality show requires.

There is plenty of singing in the film, Mandy Moore a good singer as always, her opponents vary in their skill. All the acting is well done. The characters are real and clunky as you would expect some of them to be. Hugh Grant does a superb job as the long time host of American Dreamz, and Dennis Quaid does a great job as the recently re-elected President.

This is nothing amazing, but still a fun movie. It's good to see jokes about popular media today, that feels like it could be real.

American Dreamz is so corny. I love it. It is a true satire. It pokes fun at the many talent shows that fill our TV screens. The show follows the personal lives of the contestants and how they will do anything to win. The contestants are selected by their stories rather than their talents. The songs are so bad I both cringe and giggle.

Hugh Grant is in a role that is close to his real life. He is a judge that thrives on the publicity and flirts with the females. There are a lot of other big stars in this movie including Dennis Quaid and Willem Defoe. Quaid's character, the President of the United States, is desperate to improve his public profile so is a guest judge for American Dreamz's grand final.

There are essentially two stories throughout the movie that only mesh together at the end, that of the president and the talent show. The ending wasn't as predictable as what I expected from a corny movie. I found myself thinking I knew what was going to happen and I was so wrong. I've seen it couple of times now and laugh and smile through it all.

Score: 9.3
Product reviews for listing 2781: I am Number Four
Directed by D.J. Caruso