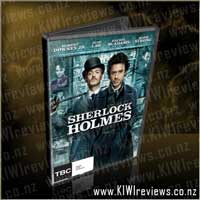 The action-adventure mystery 'Sherlock Holmes' is directed by acclaimed filmmaker Guy Ritchie. Robert Downey Jr. brings the legendary detective to life, and Jude Law stars as Holmes' trusted colleague, Watson, a doctor and war veteran who is a formidable ally for Sherlock Holmes.

Rachel McAdams stars as Irene Adler, the only woman ever to have bested Holmes and who has maintained a tempestuous relationship with the detective. Mark Strong stars as their mysterious new adversary, Lord Blackwood. Kelly Reilly plays Watson's love interest, Mary.

This movie went above and beyond my expectations. Robert Downey Jr. has been excelling at his roles as of late, and his portrayal of Sherlock Holmes, perfectly captures the essence of the books. Leading into the film, Sherlock's inaugural fight scene is in fact a breakdown. At a slower speed, Sherlock identifies every move that he will make and shows the consequence of each action, before a quick rewind occurs and he flies through his prescribed actions in minimal time, exactly as planned. Soon after he is in a similar situation, this time with multiple enemies, though he is interrupted during his analysis and forced to improvise. But the beauty of Sherlock is his keen observational skills and thought processes.

Throughout the film we see him observant of the finest of details in the most stressful of situations. The books always made the readers engrossed, trying to figure out how the clues fitted in together, whether the clues that were stated as such, or the background descriptions that are glossed over. And the film follows this process with a mixture of subtle (silently licking a piece of limestone) and obvious clues (pointing out a clue), that keep the viewer thinking throughout how they could all be correlated.

The storyline follows the apprehension of a serial killer and practitioner of "Black Magic", Blackwood, who is sentenced to be hung, but his crime spree continues on, causing a fear of the supernatural amongst the people. Sherlock returns to the completed case to determine what happened after the hanging, and to recapture the criminal.

In the end, as is often the case in the books, Sherlock goes point by point, explaining how he figured out the case. The great thing about this being a film is that you can far easily see (with the help of flashbacks) exactly what subtle clues we as the viewers missed, that were vital. Set in a time in history where alchemy was still in full swing, and "steampunk" is high end technology, Sherlock Holmes is guaranteed to enthral the viewer.

O-M-G! What a wonderful reinvention of a classic sleuth!

With today's trend of making things darker and grittier than the versions of our youth, it was interesting to see how they would handle the reinvention of The Gentleman Detective himself... and what a wonderful surprise this turned out to be.

Gone is the sophisticated, genteel, almost sublime guardian angel of Baker Street, here we find a mere mortal man, gifted with a level of perception and intellect not quite as unmatched by his peers as he would wish, though still far in excess of those with whom he is surrounded.

Watson is a man amongst men, a gambling addict trying to rehabilitate himself, and in love with a 'woman with history' who accepts him for who he is, rather than for whom he associates with... for *this* Sherlock is not the suave sophisticate the classic tales portray. He is rough, unable to control his tongue or comprehend social niceties, speaks his mind plainly even at the detriment of his health or the case he is working on... I would almost say he has been recast as someone with high-functioning Asperger's Syndrome - He's brilliant in a limited range of situations.

The fights are great, especially the one's where Holmes mentally choreographs events, then plays them out as though they were rehearsed with the victim earlier. I was impressed by Downey's rendition of Holmes... he brought a rather realistic grit and desperation to the character that made the recasting 'stick' - it didn't feel like someone trying to be a different Holmes, it felt very natural to watch.

Jude Law plays a rather different version of Watson as well, and again, excellent work on the part of the casting agents, they nailed it here too. Where they did let themselves down though was with the fem fatale Irene Adler, played by Rachel McAdams... she did not really sit well in her assumed skin I fear. Her performance didn't ring as smooth and true for me as the other characters. Despite that, she did a fairly passable job here... just.

Overall, this was a great movie to watch. I wish I had been able to see it on the big screen though, as I think that would have really made it sing to it's best... but a home screen is better than none, and it worked wonders for something to keep me glued to the screen. I was especially taken by the diabolical plot twist right at the end that was utterly unpredictable in foresight, but obvious in hindsight. Doncha just hate that?

Fasten your ergonomic seat belt...you're in for a hilarious ride through the inner workings of Office Space, the outrageous hit comedy that "will strike fear into the little hearts of evil bosses everywhere."