Diary of a Pukeko review 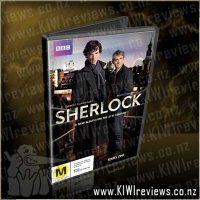 Sherlock Holmes was always a modern man - it's the world that got old. Now he's back as he should be: edgy, contemporary, difficult and dangerous, with as the eponymous hero.

John Watson is a doctor, soldier, war hero and lost soul. Fresh from fighting the war in Afghanistan, a chance encounter brings him into the world of Sherlock Holmes a loner, detective and genius - and John's new flatmate.

This series of action packed and highly entertaining television movies follows Sherlock and John as they navigate a maze of cryptic clues and lethal killers to get at the truth. The world's favourite detective has come out of the fog.

Two blokes sitting on a train commuting between London an Cardiff get talking about one their mutual favourites Sherlock Holmes and what would happen if he was brought in to the present. This is how the new take on Sherlock was formed with those two blokes being Stephen Moffat and Mark Gattiss of the rebooted Doctor Who franchise writing fame. If this all sounds a bit Men Behaving Badly for you well it probably is because Stephen Moffat was also the man behind that gem from back in the day.

Sherlock is the modern day tale of London's most well known Consulting Detective and his friend and roommate Dr John Watson, a war veteran haunted by the images of his past. The basic premise behind the updating of Sherlock is that the novels are not all about deer stalker caps and pipes of a bygone Victorian era, but like Shakespeare the tales are instead contemporary and therefore should be set in modern times. There are many references throughout the stories to the original books and terminology is updated accordingly. no longer smoking a pipe, a "three pipe problem" becomes a "three patch problem" as Sherlock is hopelessly addicted to nicotine patches.

Casting is well done with good on-screen chemistry between Benedict Cumberpatch as Sherlock and Martin Freeman as Watson, and the use of modern day London just seems to fit, even if Baker Street becomes a little more of a side street than it is in real life - but I guess they couldn't use the "real" 221b Baker Street as it houses the Sherlock Holmes Museum.

I enjoyed this new take on Sherlock, but 3 feature length episodes really only does enough to hook your interest and by the end of the third I found myself left wanting more. This is often the way with British series that are never the same length as the 20+ episode series that come out of America, but you do still usually get at least 6-8 episodes from the Brits.

An edgy new twist on a classic set of tales, this brings Sherlock Holmes into the modern era without corrupting the image of the 'ahead of his time' sleuth we know and love from the original books by Sir Arthur Conan Doyle. Without the harsh, violent grittiness introduced by Guy Ritchie's version, this character still maintains his aloof disdain for 'mere normal people' who don't really think and can't see the blindingly obvious clues all around them. Basically, everyone who isn't Sherlock Holmes.

In today's parlance, we'd say he is clearly a high-functioning Asperger's, with a clear case of strong narcissism and possible a dose of sociopathy thrown in as well. All fancy-talk for "the guy is brilliant, but just doesn't really 'get' people as anything but an abstract concept." Which, of course, makes him amazingly wonderful and entertaining to watch, even if he does make you feel a little dumb in comparison.

John Watson, on the other hand, is a war veteran, fresh back from the front lines and suffering from night terrors and post-traumatic stress disorder - but managing to keep a fairly good lid on it, all things considered. Thrown into the mix with Sherlock, and getting confused as a gay couple by Sherlock's strange and somewhat ditsy landlady, he manages to act as a semi-stabilising influence on Sherlock, a backboard to bounce ideas off, and someone the audience can easily identify with as he looks almost as lost as we feel when Sherlock launches off on a tirade of "...what is blindingly obvious..." - but isn't... to us at least.

The casting was bang on IMHO, right down to the overlooked brother, Mycroft Holmes... though I am not entirely sold on this version of Moriarty... who appears to be more of a cross between Dr Evil and Ghengis Khan - ruthless, with a private army, but basically somewhat of a wet noodle in person.

The biggest disappointment of this series for me - it was a total of three episodes! I mean really, why bother?! Six is the bare minimum to call it a 'series', three is a 'mini-series' or 'a waste of budget' depending on how well it turned out. In this case 'mini-series' is the clear choice, but still...

Overall, it's a lot like one of those American junkfood treats, 'Twinkies' - gone before you really appreciate it, leaves you wanting more, but you just can't figure out where to find them and not too sure if they're even still being made, but remain ever hopeful you'll stumble across more at some point in the future.