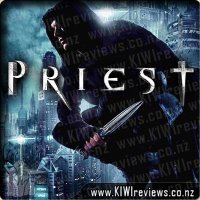 Disclosure StatementFULL DISCLOSURE: A number of units of this product have, at some time, been supplied to KIWIreviews by the company for the purposes of unbiased, independent reviews. No fee was accepted by KIWIreviews or the reviewers themselves - these are genuine, unpaid consumer reviews.
Available:
on DVD from December 2011

A post-apocalyptic, sci-fi vampire-thriller from the director of 2010's Legion, based on the graphic novel by Min-Woo Hyung.

Set in an alternate world, ravaged by centuries of war between man and vampires, the story follows a legendary Warrior Priest (Bettany) from the last Vampire War who now lives in obscurity among the other human inhabitants in walled-in dystopian cities ruled by the Church.

When his niece is abducted by a murderous pack of ugly vampires, Priest breaks his sacred vows to venture out on a quest to find her. He is joined on his crusade by his niece's boyfriend, a trigger-fingered young wasteland sheriff, and a former Warrior Priestess who possesses otherworldly fighting skills. When I saw the DVD art for this film, it screamed "Underworld"; the whole protector of the city watching from the rooftops schtick, not forgetting the blue filter. I even soon discovered that vampires were involved in 'Priest' too. As a fan of the 'Underworld' franchise, I had high hopes for this film.

But I quickly came to realise that despite the interesting little "educational" introduction in the opening sequence to explain the history of the priests, and the creation of these religious cities, the film did not really take place within them. They merely started there. Instead the film took place in deserted towns, and desolate wastelands, devoid of citizens to protect or things to defend.

The villain himself, came across more as a supervillain from a cartoon series, than a true villain. Kidnapping was really a poor choice. And Karl Urban was a poor choice in casting. His choice in "dark knight batman-ish" gruff grunts, was less than appealing, and again made his character appear more cartoony, than what would be expected of a graphic novel.

What this film needed, was to be the introduction. The story from the introduction was a great story. It was a story I would love to watch. If done correctly, watching the origin story of the Priests, would then be able to lead into a better sequel, where the characters have already received enough development, that there is more time for the plot. If you remade Priest with the plot of the opening credits? I would definitely watch it.

The remaining cast were pretty good. Names that are not quite household names for me (Paul Bettany, Maggie Q, Cam Gigandet), but show promise. While not the most convincing characters, they rather look the part. I can put the lack of authenticity down to poor script, as the entire film was predictable. The fight scenes were interesting, but as they only really involved fast-moving CGI vampires, there was less potential to make use of it.

I actually stopped the film halfway through, went to bed, and watched the rest the next day. That alone should speak volumes of its attention span. It was an interesting premise, but it lacked the plot to back up the backstory.

When I first saw the trailer to this movie, I have to say that I wasn't too excited about it. Yes, it appeared to be a new take on the vampire 'history' that we all know so much about, but it really just seemed like an excuse for special effects and some neat fight scenes. We borrowed it when it came out on DVD, and while the fight scenes would have been great fun on the big screen, the rest of the movie wasn't good enough to warrant the full price of admission.

Most of the plot line was predictable, right from the start it was easy to pick out who the bad guy was going to be, who had feelings for who, what secrets were being kept secret etc. So as far as plot goes, not a great movie. But the fight scenes seem to make up for it, and take it from being an awful movie to a just above average movie.

Watrching Karl Urban - a staple favourite actor of mine in many great movies (Chronicles of Riddick, Doom, Star Trek, Lord of the Rings, etc) - pulling off REALLY bad "Clint Eastwood" Western poses as a supposed kick-arse, uber-mench first-of-his-kind human vampire... it makes my blood run cold... and not in a good way.

Paul Bettany, on the other hand, having shown his talents in "A Knights Tale" and "Inkheart" amongst many others, pulled off a pretty good rendition of a trained psychotic warrior machine of God... gone rogue. Forgiving the VERY "Chinese Martial Arts Drama" CGI-assisted super leaps, he does a pretty mean fight scene against "Vampires" - which are NOTHING at all like the ones we have come to accept. No... these are not humans cursed to drink blood for eternity, these are a specific race of their own, born with 4 limbs, but no eyes and hatched from womb-like sacks attached to walls or ceilings.

Maggie Q pulls off a pretty passable 'second fiddle' to Bettany's Lead Maniac role, as a fellow "Priest" - the new Warrior Caste brought into play for the last Vampire/Human War that resulted in the remaining vampires being locked away in underground reserves, tended to by their "Familiars" - humans who willingly became thralls to the Vampire Masters. In an eerie echo of the aftermath of the Viet Nam War Vet syndrome, fearing the power of these warrior caste, they were ordered to disband and reintegrate into a society they no longer understood, having only known war and slaughter their entire adult lives. Most, apparently, ended up working in the bowels of the cities as sanitation workers, where their supernatural strength was an asset instead of a cause for fear.

Overall, despite having a great cast, an intriguing new twist of the Vampire Origins mythos, and a hodge-podge of concepts all pulled from disparate sources and meshed fairly seamlessly... this movie totally underwhelmed me. The action scenes were good, considering... the plot was understandable - if a little stunted and disconnected in places, but the movie as a whole was rather washed out and bland for me. I only score it as highly as I did because of the near-constant desire to go back and watch all the fight scenes again at half-speed to see how they were done. If you want chewing-gum for the eyes or "new background noise" this would be worth a go... otherwise, I suggest you keep browsing the shelves for something with more "grab you" factor... something with a fluffy bunny might fit the bill better.