Home > Categories > Movies > Horror > The Girl with All the Gifts review

ProdID: 7828 - The Girl with All the Gifts
Directed by Colm McCarthy 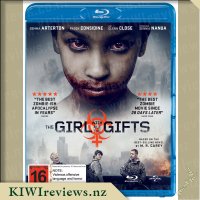 The Girl with All the Gifts product reviews

In a heavily guarded compound, a small group of children are being studied in a programme to discover the cure to a virus that has ravaged the globe. They are the last hope the human race has for survival.

10-year-old Melanie (Nanua) attends school lessons daily. Like any young girl she has a favourite teacher and a favourite subject, however, she is escorted to class in full body restraints and when they come for her, it is with guns drawn. Melanie and her fellow pupils are second-generation hybrids - part Hungry, part human. But unlike first generation Hungries, Melanie excels in the classroom, is acutely attentive, imaginative, highly intelligent and loves her favourite teacher, Miss Justineau (Arterton).

Melanie's talents draw the attention of Dr. Caldwell (Close) who is searching for the key to the evolution of the virus. When the base is overrun by Hungries, Melanie escapes with Miss Justineau, Sergeant Parks (Considine) and Dr. Caldwell who is intent on using Melanie to synthesize a vaccine. Bound for a fortress-like enclave where society clings to life, can they survive? Does Melanie hold the key to unlocking a cure for the plague on course to destroy the human race? 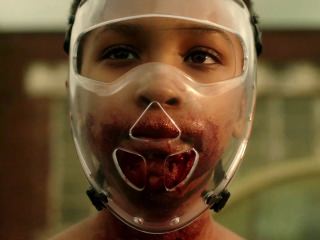 The premise of the movie is refreshing. It takes the usual zombie movie idea (or hungries as they call them), and flips it upside down, providing an "infected" character that is the protagonist, rather than the antagonist. Too often are the infected portrayed as an evil being that must be cleansed from the earth through fire and headshots. Here we have a more realistic entity; a fungal infection that spreads very fast, and forms a symbiotic relationship with its host.

The film is very well structured, and has a wide range of characters that you would expect to come across, the willing and unwilling subjects, those that were brought up in a system that knows no different, the uninfected that see the potential in the infected for a cure, the potential as a living breathing organism with a life, and those that hate the infected completely. You get to experience all of the emotions and personalities, you can align yourself with whichever characters you want and can see how each personality trait plays out in terms of survival rates.

The idea of symbiotic relationships, two organisms prospering together, is a common theme throughout the film, where you find many opposite personalities relying on the other for survival, and having to place trust on otherwise unwanted sources of aid. Being able to trust something that you know has the ability to kill you and your entire team, having to choose to remove the one thing that protects you (for instance a mask that stops hungries from biting), to save your team long term.

I had never heard of this film before, and frankly wasn't expecting anything too spectacular. But I had a very high level of engagement with the film. You feel each moment of suspense, you feel the dread every time a wrong step is taken, you feel hope when something goes right, and you feel unease at the unknown elements. Potentially this film may take out the top spot in terms of zombie films plot-wise, especially with regards to character development of the "hungries" with realistic and believable characteristics.

Casting-wise, I am not familiar with most of the them. A factor that I enjoy in films such as these because it forces the cast to be convincing in their portrayal of their characters. Often, big names can rely on their status as established actors to get them through a film without people being too critical as the audience are blinded by the stars previous successes. Lesser known cast will often put across a more convincing performance.

The film is beautifully shot, with a yellow green hue, which gives a rustic, and organic feel to the film. The military uniforms, vehicles, the natural environments, the hungries, the spores, they all have a similar colour scheme to them, and it adds to the sickness of the film; someone that is unwell is usually described as "green in the face". Every aspect is well thought out. Including the ending, which was entirely unexpected, but remains hopeful, and again realistic and grounded.