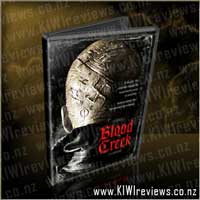 After 71 years, in 2007, Evan Marshall's life has stalled at twenty-five years old. Left without answers after his older brother Victor's disappearance from a camping trip near Town Creek, he has tried to move on. But when Victor returns one night, very much alive and having escaped his captors, Evan asks no questions.

At his brother's request, he loads their rifles, packs up their boat and follows him back to Town Creek on a mission of revenge that will test them in every possible way

For me, there has only ever been two types of movies, sci-fi, and comedy. I can appreciate pretty much ANY movie, but it gets classified into one of those two groups. Horrors have always been rather lame and tame for me, with a few notable exceptions such as the second 'Saw' movie - THAT was just plain disturbing!
This movie doesn't quite reach the levels of "corn" required to make it as a comedy and it's certainly not sci-fi, so I guess it's about time I created the third category in my head.
An "interesting" performance from Dominic Purcell - of "Prison Break" fame - as Victor, the big brother war hero who went missing on a camping trip right out from under his little brother's nose, admirably played by Henry Cavill, who I first encountered as the lead male role in 'Stardust'. However, by far the most shocking and, by character-definition, powerful role, was that of the Nazi occultist Richard Wirth, played by Michael Fassbender from Band of Brothers fame, who also appeared in "Inglourious Basterds".
All in all a really graphic, blood-lust soaked movie that may scare the beejeebers out of the weaker ones, but will still have a couple of flinch-worthy moments for even relatively jaded viewers.

Score: 9.3
Product reviews for listing 6435: Inside Out
Director: Pete Docter

Do you ever look at someone and wonder what is going on inside their head? Disney/Pixar's original new film "Inside Out" ventures inside the mind to find out.

Based in Headquarters, the control center inside 11-year-old Riley's mind, five Emotions are hard at work, led by lighthearted optimist Joy (voice of Amy Poehler), whose mission is to make sure Riley stays happy. Fear (voice of Bill Hader) heads up safety, Anger (voice ... more...