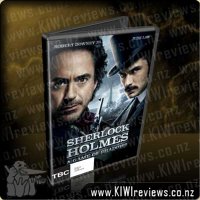 Around the globe, headlines break the news: a scandal takes down an Indian cotton tycoon; a Chinese opium trader dies of an apparent overdose; bombings in Strasbourg and Vienna; the death of an American steel magnate... no one sees the connective thread between these seemingly random events - no one, that is, except the great Sherlock Holmes, who has discerned a deliberate web of death and destruction. At its center sits a singularly sinister spider: Moriarty.

Holmes' investigation into Moriarty's plot becomes more dangerous as it leads him and Watson out of London to France, Germany and finally Switzerland. But the cunning Moriarty is always one step ahead, and moving perilously close to completing his ominous plan. If he succeeds, it will not only bring him immense wealth and power but alter the course of history.

This sequel is a step up from the original with respects to action. Robert Downey Jr. reprises his role as Sherlock, and starts off in a similar fashion to the first; with an analytical fight scene breakdown. This scene alone is great as it shows Sherlock uncovered; his body is not toned and carved, like you would expect most male leads to be in such a role. Instead we have an average middle aged male; his body jiggles in places, and he bruises and hurts like any other man. And that is the magic of it all. Knowing Sherlock's vices, one would not expect him to be fit. He deals not in brute force, but of the intellectual fight.

In this sequel, Sherlock is hunting down the villain, Professor Moriarty, who was alluded to at the end of the first film. Tracking Moriarty around the world, Sherlock always appears to be one step behind. Even captured at one point. But gathering clue by clue, and with the use of his friends and associates, Sherlock is able prevent war, and foil Moriarty's plans.

Filled with explosions, cover-ups and extensive facial reconstruction, this movie is full of deception, and light hearted comedy in all the wrong places (which makes it even funnier).

The clincher for me is in the ending; Moriarty's plan foiled, and Sherlock wounded, they start their combined slow-motion breakdown the oncoming fight, every move by Sherlock is countered, and he eventually loses. But it's Sherlock. He always has a way out, doesn't he?

When I first saw the trailer for this, I was excited, as I'm sure most people are when they see a trailer for a sequel to a movie that they enjoyed. However, the trailer left me feeling more confused than anything as it looked like it was trying to be the same, yet different.

The movie overall was good, and the characters followed on well from their place in the first movie, it flowed well enough but without being anything great or set apart from the original movie. It was easy to see how they were following the books and I knew from everything in the trailer that it would basically follow the 'final' book, the one where Doyle tried to stop writing about Sherlock.

The lead up to the end of the movie was good and delivered everything that you would expect, but it was nothing great and I didn't not enjoy the final fight between Sherlock and Moriarty, which left me feeling a bit cheated. Still, not too bad a movie, and if I end up owning the first I will be happy enough to own this as well.

Once again we are graced with the screen presence of Robert Downey Jr, proving that though he is apparently typecast as an eccentric, somewhat obnoxious pratt, he can actually be a *different* pratt... in this case he is the darker, more modern version of the famous detective instead of a multi-billionaire playboy philanthropist in a powered battlesuit. And what a wonderful job he does of it.

Though this movie very much is "more of the same", it's certainly fair to say it's more of the best of the same... more deductive trains of thought, more previsualised fight scenes, and more intuition mixed with logic to give results... but suffice to say, no sequel survives by being more of EXACTLY the same - there has to be a twist. In this case the twist comes in the form of far more Moriarty, Holmes' opposite number... and anti-Sherlock if you will. This role is played to great effect by Jared Harris, who gives a sterling performance that really captures the essence of the criminal mastermind pulling hidden strings 5 steps ahead.

I admit to being a little disappointed by the thin and somewhat ragged plot though... predictable to a severe degree in places, I found myself stumped only once throughout the entire movie. For a tale such as this, I would expect to be baffled and lost throughout, dragged along by Holme's intellect and insightful breakthroughs... instead I almost felt held back by the plot in key moments. The general rule-of-thumb for such movies - "If it seems pointless and besides the point now, it'll probably be the vital key somewhere down the track" proved to be all too accurate, with every sidetrack proving to be a key puzzle piece. Now and then, I do like a 'red herring' in my movies, just to keep me guessing. No fish here, alas.

Overall, though this was far from as good as it could have been, it certainly wasn't a dud... far from it! But with the standard of movies these days, it's disappointing, and almost unforgiveable, to put out anything but the very best. This fell short of that lofty mark for me, but I still loved it enough to watch it twice at the cinemas and four times on DVD so far, with many more watchings to come.

Imprisoned by an adult world that now fears everyone under 18, a group of teens form a resistance group to fight back and reclaim control of their future.