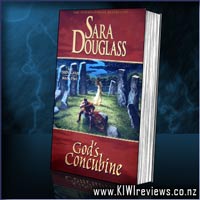 The Troy Game lives - but can anyone control it?

For 2000 years the Troy Game has survived Asterion's attempts to control it. Admitting defeat, he allows the rebirth of the Game's creators... to lead him to the golden kingship bands of Troy.

Now Genvissa and Brutus find themselves born into a vastly different world, on the eve of the Norman invasion of England. Cornelia has also returned, even more determined to thwart them.

Yet Brutus and Genvissa's most deadly enemy may be the Troy Game itself. Left on its own for 2000 years, the Game has changed. Become aware. Become manipulative. Become devious. Become alive.

And Asterion, abroad in Anglo-Saxon London, is desperate to find it.

I started this book a little curious, and a little concerned. I was worried that I would have trouble with it because I did not read the first in the trilogy. I was wrong.
It started a little strangely -to me anyway, simply because I thought the baddies were the main characters and I was wondering how Sara Douglass was going to make these guys likeable. Funnily enough the good guys came along and the book really gripped me. It was an amazingly well written book- I very quickly got to the point where I just couldn't put it down. It's a fantasy, but also well set within the real world. There is a resonant Shakespearean tragedy kind of element to it, and if you are the sort to emote easily its dangerous ground.
The characters are deep... really deep, but Douglass gets right into the heart of them so you get an amazing view into the drive of each of the main players of the game.
I wish I had a larger vocabulary so I could better describe this stunning story to you; all I can say is read it! You won't be disappointed-
I highly recommend it, with or without the first book- although you might just want to make sure you get the third - Darkwitch Rising.