« Why Am I So Tired? How to put fuel back in your tank. review 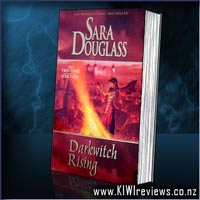 Restoration London becomes the field of the most desperate battle yet for the players of the Troy Game. Asterion lurks in a nightmarish lair built against the rear wall of the bone house of St. Dunstan's-in-the-East. Here he traps Cornelia-reborn Noah Banks, and Genvissa-reborn Jane Orr, and plots to obtain the kingship bands, the Troy Game and Noah.

But no one could have anticipated an ancient Darkwitch rising from the dead with a secret so terrible it will not merely tear both Game and land apart, but devastate any chance that Noah and her lover, Brutus, can be together.

Darkwitch Rising continues The Troy Game's journey though ancient labyrinthine secrets. It is the third installment of this epic four-book series, spanning 3,000 years and the history of one of the world's greatest cities - London.

Wow! How about a few twists and turns? Go on I dare you!
This book is, dare I say it, even better than the second one. I am now very impatient to get my mitts on the fourth book in the series - tentatively titled Druid's Sword.
Fantasy and science fiction have ever been my favourite genres, but this series binds fantasy so securely with history it is as if it were truth indeed, which is in my mind, a sign of an incredibly talented writer.
I am constantly enthralled with Douglass' ability to enable characters to grow and evolve within a series. This is something I have rarely come across, and it truly adds to the magnificence of this book.
It is a human trait to see what you want to see - something Douglass exploits well here, particularly in the case of the characters you believe to be villains. Are they? Or are they also at the mercy of the Troy Game? Is everyone who they seem to be? One twist completely shocked me!
Possibly the only point of difficulty is keeping the characters straight. When someone has been born three times it gets a bit tricky remembering who used to be who!
This story is as skillfully woven as the second book, if not more so, with a depth and richness other authors could only hint at. I am thoroughly impressed with this book, I cannot praise it highly enough.