A Song of Ice and Fire 4: A Feast for Crows review 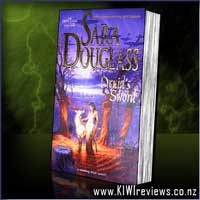 As Hitler unleashes his bombs on London, another, more ancient, terror emerges...

It is the early days of the Second World War. Grace - daughter of Asterion and Noah - remains bound in agony to Catling, her wrists cruelly scarred by the otherworldly restraints.

There are none, it seems, who can help Grace. Certainly not her mother or father. Jack Skelton, Brutus-reborn and the love of Noah's life, is the only one able to break through Grace's carefully consstructed barriers. It may be that Grace is not entirely helpless after all...

And while Genvissa-reborn and Coel-reborn attempt to identify exactly how to deal with the grip of a malevolent Troy Game, a killer stalks the streets of London creating terror upon terror as the bombers shadow the land.

Druid's Sword is the final stunning instalment of The Troy Game, a fabulous labyrinthine journey through the secrets of the ancient world. To enter The Troy Game is to enter the imagination of one of the world's greatest storytellers in this epic series spanning 3000 years and the story of an incomparable city - London.

This could quite possibly be just about the best culminative story I have ever read. Not only does the book twist and turn like the labyrinth it is based around, but it's not even in a predictable way - and normally I can pick these things from miles away.
I usually enjoy Sara Douglass as an author, and this time was no exception. She weaves a fantastically rich tapestry under normal circumstances, and this series has been quite extraordinarily rich. Characters that have real history and relationships that you can actually believe have lasted and developed and grown over generations. The characters are extremely interesting because of this sheer volume of interaction between each other.
The way Douglass has interwoven real-world history into the story is just amazing, and it makes the story that little bit less unbelievable - sort of takes it from the realm of fantasy and drops it firmly into the part of you that still believes that there 'might be' something hiding under the bed.
I was mildly disappointed with some aspects of the ending, only because I had gotten certain ideas myself and was hoping that things would work out the way I planned. Can't always get what you want - but it's still a beautiful ending :)
I truly totally thoroughly recommend that anyone who even vaguely thinks they might like to read a book pick this series up and dive in. I was completely hooked and you will be too.

Matiatia Bay is the gateway to Waiheke Island. For centuries it has been the landing place for travellers in the Hauraki Gulf - from waka?to yachts, excursion steamers and commuter ferries.

Now Matiatia finds itself at a crossroads - this beautiful heritage site is also a transport hub for the island. The pressure for development is real, yet the bay's historical significance must be respected. Waiheke residents, urban planners, the ... more...