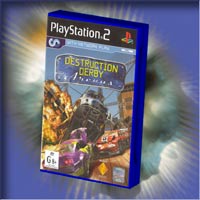 THE SATISFACTION OF DESTRUCTION

•  Write off 20 hotrods in chaotic, car-crunching carnage!
•  Throw some stunts, break some bones!
•  Buckle your buddy's bodywork!
•  Burn rubber across 18 awesome tracks and bowls!
•  Soup up your motor with a huge range of customisable extras!
•  Supports up to 20 players online (with Ethernet adaptor).
•  Driving Force steering wheel with force feedback fully supported.

Whether you're buckling bodywork in Brisbane, damaging dashboards in Darwin or wrecking windscreens in Wellington, it's time to TRASH, SMASH and CRASH online.

I am a big gamer and love all kinds of games. My mum thinks I play to much games and is always telling me I need to take a break and go outside for a while haha shes probably right I do spend a lot of time gaming and sometimes I get so caught up in the game that before I know it its bedtime or something.

This game is pretty cool. I guess I like that I can speed and crash and hit stuff in my car and know I wont get in trouble for it. There's heaps of cars to crash and you can even do stunts. Some stunts are hard to do and some are pretty easy but they are all cool. The kinds of cars are awesome and I would like to own all of them. You can play this game with more than one person and I like when I'm playing with others and can smash their cars up. It's pretty funny.

It's a fast game for smashing and crashing but that's about it. The graphics are pretty cool and the music and stuffs cool too but I like games that have story lines and need me to think and be careful and use strategies and stuff. This game is good for fun and laughs and when you don't want to follow the rules, plus everyone likes smashing into things and it's good because if you aren't good at driving games it doesn't matter because you have to crash in this one.

I love that you dont have to drive perfectly around a racing track like you do with most other car games. The object really is to smash up your car...how cool is that? But unlike other Destruction Derby versions, in arenas you get to soup uip your motor and do stunts...its more than just crashing in to other cars.

Very entertaining and a lot of fun. The only downfall for me is the price, but then I have never been a fan of the price of console games. Its also not one that I would sit up all night and play, however if I was a gaming fanatic I imagine I could easily sit up all night and play, but still a very fun game that both myself and my children enjoyed.

This game appealed to me because I LOVE the fact of being able to absolutely destroy cars in a bid to win the race. Because lets face it, standard race games tend to become boring and especially when you don't have car damage.

The game has awsome graphics, and has a range of cool cars to smash, but gameplay feels a little slow. A little dissapointed that some really cool features are blocked off because you can only play them when you are online.

Mainly because I SUK at driving games, I was sure this game was going to bore me pretty quickly... but I was surprised to learn that my lousy cyber-driving skills are actually an asset in this game! By weaving all over the place I hit hidden bonus point drops, knocked my opponents into traps and off the track, smashed and crashed with great abandon, and just happened to clock up major points in the process.

This game is such a hoot, even my 3yr old son demanded to have a blast (and really made me feel stink when he beat me on points 2 out of 3 games!) so you have just gotta love it!

With easy-to-understand controls, very realistic physics (despite the slow-motion mid-air rolls and flips) and some awesome explosions, this game is a real addiction-maker in the making!

Overall, if I could bring myself to spend $100+ on ANY game, this is one I would buy for sure, just to give me some good, honest, brutal stress-relief after a hard day at work. :)

Thanks muchly to the fine young man who loaned it to me for the weekend.