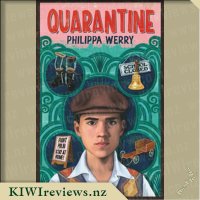 Disclosure StatementFULL DISCLOSURE: A number of units of this product have, at some time, been supplied to KIWIreviews by Scholastic (NZ) or their agents for the purposes of unbiased, independent reviews. No fee was accepted by KIWIreviews or the reviewers themselves - these are genuine, unpaid consumer reviews.
Available:
April 2022

"Being in quarantine sounds like being in prison," I said, shivering.
Lily nodded. "A bit like that. Except that the prison is your own home."

It might all sound familiar in the 2020s, but this is New Zealand in 1936-37. The disease is infantile paralysis, or polio, and nobody knows where it will strike next. When even the adults are afraid, Tom find refuge in his dream - to run in the Olympics like his hero, the famous Jack Lovelock.

The novel includes historical endnotes and images from the period. It was formerly published as Enemy at the Gate.

As a child, I found that books written in the first person annoyed me. This is a shared dislike in our family - Mr 12 and Miss Ten also prefer their stories to be narrated in the third person as they come across as more dynamic. As Mr 12 remarked, first person narratives involve rather too much navel-gazing!

This book, however, is proof that a skilled author can transform a first-person narrative into a fast-paced, gripping story that results in compulsive reading for everyone. I read it first, then Mr 12, and finally Miss Ten (who has not quite finished it). Their mother is next in line! What made the impact on all of us was the racy style, the ease with which Werry crafts her descriptions, and the underlying fear that what happened during the poliomyelitis outbreaks is happening all over again in today's world.

Coronavirus with its various mutations has dominated everyone's lives for the past two years. The experiences of Tom and his family are all too familiar to those who have experienced lockdowns, school closures, and all the other disruptions that go with having a full-on epidemic in the community. The situations they face are not new; in fact, old people who were alive when polio was at its peak in the 1930s will be the best equipped to cope this time round.

I was impressed by the way Werry gets into the character of the 12-year-old boy, describing the effects of the "infantile" on himself and on his siblings and friends. There has been so much written about COVID-19 these days, but most of it is from the point of the adult analysing the situation for society in general, and outlining the effects on children and teenagers. This book takes a different approach, offering a boy's perspective on what is happening to his world. At times I found myself forgetting that it had been actually written by an adult.

Although Tom's attitude is light-hearted throughout most of the story, there are glimpses of the horrors lurking in the background. A child dies; a family disappears overnight never to be heard from again. Children are sent away from the cities to stay with family in the country where there might be less risk of catching polio. Tom's own family is not exempt as his sister Flo contracts the disease and spends long months recovering in hospital.

The story of Jack Lovelock and his influence on young Tom as he seeks to prepare for a career in athletics is an important theme in the story. Tom's aim is to compete in the Olympics just as Lovelock did. Keeping his dream alive helps him to cope with being separated from his friends during lockdowns; many young people both then and now did similar things like learning new skills to keep themselves busy when they could not attend school or mix with their friends.

The social background to the time period is the other important theme of the story. In an era where there was no internet, no television, and few mod cons in the house, life was very basic. The fire had to be lit, the meals prepared in what today's children would consider to be spartan conditions. Every family member had chores to do, and heaven help the child who tried to sneak away. Roles were prescribed according to gender and age. Mum was the queen of the kitchen, and Dad had to be pampered when he arrived home from a hard day's work.

Mr 12 enjoyed the book as much as I did. Miss 10 found it a bit of a challenge but is reading it at her own pace; I think some of the descriptions of life in the 1930s are surprising her, but she thinks it would be interesting to do a quick drop-in as a time traveller. The thing that really horrified both of them was the idea of almost rancid school milk on a hot New Zealand day - they could not think of anything worse! That amused me; I explained to them that I was still at school when the free milk scheme was running, and just like Tom I hated it. I was (and still am) allergic to milk, but the school demanded a note from home at the start of each year before they would excuse me so in the interim I was issued with a daily bottle. Like Tom, I had an arrangement with a boy who would swap his empty bottle for my full one when the teacher was not looking!

Zog is the keenest dragon in school, but will he ever win a golden star?

Listen to the story, sing alond with the song - and make a 3-D Zog scene!