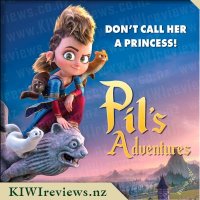 Disclosure StatementFULL DISCLOSURE: A number of units of this product have, at some time, been supplied to KIWIreviews by Icon Film Distribution or their agents for the purposes of unbiased, independent reviews. No fee was accepted by KIWIreviews or the reviewers themselves - these are genuine, unpaid consumer reviews.
Available:
in cinemas from 2 June 2022

Pil is a young orphan living in the medieval city of Foggyburgh. One day, the cruel regent Tristain curses Roland, the heir to the throne, by changing him into a "chickat" (half chicken, half cat).

To save Roland and the kingdom, Pil embarks on a quest for the antidote, along with Graubart, a clumsy guard with a good heart, Jiggler, a young loony jester, and her three tamed weasels.

From the Cursed Forest to the Glen of the Beast, Pil and her unlikely companions live their greatest adventure and find the family they never had.

There is an old truth that says there are only 12 true, original stories and all subsequent tales are simply variations on a theme. You know, the way that Disney's 'Pocahontas' and James Cameron's 'Avatar' are basically the same story, with just a few theme variables swapped out. (Think about it, it's quite scary after the third or fourth "What the..." moment.)

So it's fair to say that the story of Pil and her fluffy friends may feel somewhat similar to other stories in places. There are definite overtones of Aladdin and Prince of Persia popping up throughout, and the stereotypical hedge witch makes an appearance - though the combo of Celtic facial tattoos and riding a flying broom... yeah, that was a bit of a stretch too far.

The story, while a little 'lite' due to the style of French cinema, and it clearly being aimed at a rather young audience, is well supported by non-stop cute-action moments brought about by the cute ferret antics. Having spent some time with a pet ferret, I can say that the animators did a wonderful job of capturing all the tiny movements that make even a ferret on the hunt look super-cute. I was especially delighted by the manner in which the director used the ferrets as a mechanism to bring the viewer full-circle at the end of the film.

In terms of animation style, it's honest and fair to say that no attempt at realism or extreme accuracy was put into this project. The characters are detailed enough that watching them isn't painful in the least - they move well and the resolution is sky-high - but they are more caricatures of characters, simplistic in style, loose with proportions, thus ultra-cute and easy to watch as a result.

When it comes to anything on the 'red flag list', there are surprisingly few concerns. The 'violence' is always comedic, slapstick and never harmful let alone fatal. Blood plays no part in this story, other than everyone prefers to keep it inside themselves, and even the firebreathing dragon is adorable. In classic French animation style, there's not even any troublesome love-interest sub-plots to concern you. Despite this being another 'Lost Prince' tale, and it being a clear grab for power, it's no 'Game of Thrones' here!

Overall, while an adult might not really 'get into this' to any degree, it's certainly going to prove to be acceptable to the kids, who will find something in there to suit their entertainment needs - there's humour, calamity, cliffhangers and jump-scares, magic for some, swords and shields for others, bad guys, bullies and dragons galore! For the adults who want to sneak away and get some chores done while the kids are engrosed, it's worth noting that I think this will prove to be acceptable background noise to your tasks too. Worth a watch, will entertain more than many other options out there, and is relatively mild on all fronts.

The G.I. Joes are not only fighting their mortal enemy Cobra; they are forced to contend with threats from within the government that jeopardize their very existence.