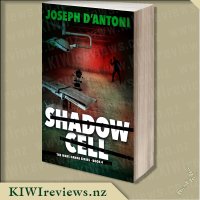 Disclosure StatementFULL DISCLOSURE: A number of units of this product have, at some time, been supplied to KIWIreviews by Joseph D'Antoni or their agents for the purposes of unbiased, independent reviews. No fee was accepted by KIWIreviews or the reviewers themselves - these are genuine, unpaid consumer reviews.
Available:
via Online Store

The disappearance of former handler and lover Megan Winslow strikes hard at Wade Hanna's soul. He tenaciously digs into covert operations and learns that Megan is in mortal danger.

The secret laboratory she has penetrated is conducting experiments on orphans to revive a Nazi effort to modify cell structures and turn innocent children into weaponised biological agents. A ruthless Argentinian mobster now has world powers unfriendly to America eager to pay exorbitant sums for this technology of terror.

Megan is the only one standing between the horrific experiments and the children's freedom. If she is discovered, torture and death will follow. Facing overwhelming odds, Wade has little time to rescue her and save the children.

While this is, as always, a fictional story... the fact that it's not unrealistic is a double-edged sword. On the one hand, it makes it easier to get stuck into and empathise with, but on the other hand it makes it quite a disturbing thought - somewhere out there could actually be a lab that is trying to turn children into bio-bombs. Far from a new concept - this trope has shown up in a number of movies such as The Transporter #2 - but the fact that the technology does actually exist today should be enough to have every sane person on the planet screaming for it to be stopped.

The trajectory of the author's skills has certainly proven to be on an upward trend from his first book - that even he admitted was less than an ideal debut despite some positive press from the American industry, which has to have you questioning their bona fides - and this tale was a lot tighter, cleaner, less convoluted and contradictory than previous tales. Yet, I still found myself struggling to really connect with it - it reads more as a Young Adult novel than one aimed at an older audience. I gave it to a teenager I know who is into this genre, and she loved it, claiming it was one of the best spy novels she has come across in years.

We both agreed that this feeling comes mainly from the lead protagonist - Wade Hanna - acting like the teen lead in the movie "The Kingsmen" - an everyday teen with some moderate level of spy and military training, rushing headlong into danger to rescue his girlfriend from the forces of evil, saving the day by a hair's breadth, and everyone cheers. The End. While this was gritty and dark, it had an almost surreal quality about how easily Wade found resources and allies no matter where he went, never showing up at all on the Bad Guys' radar.

Overall, if you are in the late-teen age bracket and want something a little more dark and gritty than Spy Kids, this entire series - and this title in particular - could be right up your alley. Find it on Amazon and via the author's website.

George and Harold have played a trick or two on nearly everyone at Jerome Horwitz Elementary. When their latest prank causes the school's cranky cafeteria ladies to quit, Mr Krupp hires a trio of unusual replacements - who happen to look an awful lot like aliens.