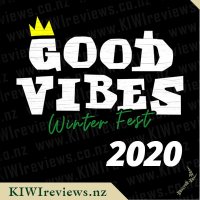 Good Vibes 2020 - one of the first major live tours in New Zealand following the COVID19 pandemic - is going ahead this winter, on the same dates as announced earlier this year, with only minor changes to the billing.

L.A.B headline all dates with the exception of Auckland, Hamilton and Porirua, where Kora will lead the charge. Meanwhile - due to international COVID19 travel restrictions - Sons of Zion will replace Kolohe Kai across all shows except Auckland and Whangarei where Stan Walker will take to the stage.

Presented by Pato Entertainment and Mai FM, the Good Vibes Winter Tour kicks off in Gisborne on July 17 and runs through to the final show in Whangarei on August 8.

What a night! Catching the Rotorua show was a really interesting experience, since I haven't been to many music festivals this size. Walking into the venue, what struck me first was how casual and easy it all felt. There wasn't the frenetic energy of a rock show, nor the slow groove of a reggae fest, but something fun and flowing. Coming through check-in, you had the option to head straight for the 'Wayver' tent to load credit onto the RFID token now attached to your wrist. This was your proof-of-ticket and digital wallet all at once.

DJ Jayrasik was already warming up the audience, which at this stage was maybe 100 or so, mostly gathered at the front of the stage or around the Greenroom Vodka tent. Security were present but staying to the sides and letting everyone enjoy the vibe, as were a couple of representatives of the Police. They appeared to be enjoying the event as much as everyone, and as far as I could tell they had no need to put on the official hats.

Che Fu was the first act, and he brought everyone up to speed for the night, throwing out some classic Kiwi groove that had everyone singing along. Ardijah came on next, throwing down some more classics that everyone to get in behind and sing along with, as well as some songs I haven't heard before. What was most amazing is seeing performers that got me into the music more years ago than any of us want to admit to I think, also rocking the newer generations just as hard.

Three Houses Down, with the General Fiyah joining them, got on stage and really got the crowd going. By this time the venue was filling up and the marquee was mostly full of dancing festivalgoers. General Fiyah may be young, but he sure knows how to use his voice. Sounding like a young Michael Jackson, he won over the crowd instantly and threw another level of enjoyment over everyone's festival experience. Between sets, DJ Jayrasik kept everyone in the spirit with his stunning mixes. The vibe never flagged the whole night, thanks in large part of his efforts.

L.A.B. hit the stage next, and the crowd, now at capacity and spilling out of the marquee and into the rain, exploded. Headliners they are, and their music shows exactly why. Stunning rhythyms and melodies that grabbed the audience and made them want to sing along as loud as possible, made the energy almost palpable. Katchafire followed on and kept that wave high and riding, bringing everyone around and down ready to groove with the mellow Reggae jams from final act of the evening, Sons of Zion.

Overall, this is one of the best smaller-gigs I have been to, and I'm definitely seeing ther appeal of this style of show. Smaller, intimate and grooving, with everyone just settling down and enjoying the show instead of getting drunk and ruining it. Would I go to more of these style of shows? Certainly would! Do I recommend you grab tickets to the rest of the tour? If these artists sound like your thing, then 100% yes... if you can. This show was sold out early and I see others are now selling out too. But watch for announcements of door sales on the day via their Facebook pages.

This unique project uses animation based on the original actors and ... more...