Home > Categories > Entertainment > Television > The Young Ones - Series One review

The Young Ones - Series Two review

ProdID: 3920 - The Young Ones - Series One
Type of Show: Surreal Humour 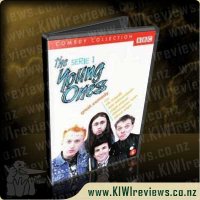 The Young Ones - Series One product reviews

The Young Ones was one of those shows that I grew up with. It's an alternative comedy sitcom, about a flat full of students who seemingly never go to University. At the time of watching it I was mostly high school aged (on repeats!) and desperate to go and study film and television at University. Funnily, the amount of time I spent at lectures later, went the same way as with the "guys" in this show.

Series One of the Young Ones was made back in the early 80s. The 6 episodes for this season were really cool. My favourite episode was Interesting, I think because I just really liked Rick's yellow dungarees. It was totally different to what the character usually wears. Also you get introduced to some of the "friends" of the flatmates. Vivian also makes a fantastically destructive vacuum which is hilarious when it gets out of control.

Episodes like Bomb highlight how completely surreal the comedy is. After all, who just wakes up in the morning and goes downstairs to find a bomb has landed in front of their fridge? My favourite part of that episode apart from Vivian's destruction of the house (again) is Neil painting himself white to deflect the atomic blast. The other episodes have a lot of merit to them too.

Another awesome thing about the Young Ones was the music. I love Dexys Midnight Runners so it was awesome to see them perform in the bathroom in Bomb. Madness was also in the Boring episode. They were a great band of the time and Ben Elton had plans to write a Sitcom for them too, which never panned out. I now own this on DVD and enjoy sharing it with the child. Most of it goes over her head, but she likes the puppetry.

The existence and the identity of the Holy Grail is one of the most enduring mysteries of all time. Dan Brown's 'The Da Vinci Code' claims to be based on much research and fact, revealing the existence of a hitherto secret organisation supposedly set up to protect the Grail in the 11th century.

It identifies Leonardo Da Vinci as one of the few in history who are in on the secret - one that can only be revealed in code. Tony ... more...