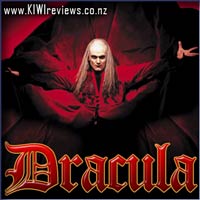 Disclosure StatementFULL DISCLOSURE: A number of units of this product have, at some time, been supplied to KIWIreviews by Regent on Broadway or their agents for the purposes of unbiased, independent reviews. No fee was accepted by KIWIreviews or the reviewers themselves - these are genuine, unpaid consumer reviews.
Available:
Limited Season

From the dark heart of Transylvania to the streets of London, Dracula charts a bloodthirsty course in his obsessive pursuit of Mina Harker.

The resulting work is breathtaking and cinematic, with the masterful count at its rich and bloody heart.

Once again, the Regent Theatre in Palmerston North showed itself to be a fitting venue for a quality show. We arrived a little early and found ourselves dodging waiting patrons with drinks in hand, as we made our way down to our seats.

My companion, well versed in the behind-the-scenes routines of theatre productions, chatted about the arts and crafts that go into a stage production until the lights went down and the main curtain rose. From here on it, there was really only one word to discribe the next 40 minutes... STUNNING! From the innovative use of set elements and semi-transparent dropcloths to project layered images giving an amazing impression of depth, to the orchestral score stirring the emotions of the audience, this was a rollercoaster ride that blew me away. I have never seen anything like this, and I sure hope I can see this level of show again.

The prologue quickly set the tone of the show, dark, forboding, fearful and tense... these were the dreams of Jonathan Harker as he lay in his bed, soon to leave his home and his wife, Mina, to travel to Transylvania to meet a new client, one Count Dracula. He awoke, screaming, cold sweat pouring from his body. Act 1 began...

3 scenes made up Act 1, Jonathan's departure from Charing Cross Station, his arrival and 'welcome' at Transylvania, and his entry into Castle Dracula and his first encounter with The Count, who proceeds to dominate and destroy Jonathan's mind. The dance, the music, the atmosphere all combined to have my heart racing at Jonathan's final scream, waking him from his delirium to find himself home again, in a Sanatorium... today we would call it a Mental Hospital.

After a 20 minute intermission, Act 2 began the first of it's 2 scenes, with a tea dance at the Winter Garden, in the Grand Hotel, Whitby. During the dance, the musical tone alerted the audience to the approaching danger. Lightning crashes, windows shatter, and time slows to a near-standstill as Count Dracula enters the room. Seeing Mina's friend Lucy, The Count takes her, drains her, nearly kills her. She lives, and Dracula leaves as suddenly as he arrived. As time restarts it's normal flow, Lucy is found and taken to the clinic of Dr Van Helsing. There, she is visited again by the Count, where he completes his bloody task, making her one of his Children of the Night, Nosferatu, one of the Undead. She escapes with her new master, vanishing like mist into the night shadows.

As the lights rose to signal the start of the second and final intermission, I had to head outside for some fresh air. This show was so stunning, I needed to sort the impressions in my head. I was finding myself so wrapped up and absorbed by the show itself, I was having trouble keeping the impressions in order. Naturally, a notebook would have been handy, but would also have been pointless, since there no was no way I could separate myself from the show enough to take notes. I so love a show that can capture me so totally I am not a member of the audience, I am simple a point of focus, and observer, separate from my body and lost in the story.

Act 3 was the climactic events, 2 burning scenes of power and passion, blood, tears, hot adrenaline and cold fear. Mina, alone in the sanatorium, receives her visitation from The Count, come to claim the apparent reincarnation of his lost love Elspeth. As he takes her, dances with her, seduces her... she gives herself to him, and in the climactic final moments of the scene, he drains her of blood, then feeds her his lifeblood, making her something more than human... his forth and final bride, his Queen of the Night. They vanish into the shadows just as Van Helsing arrives with news of his failure to find the missing Lucy. As Dracula begins to consumate his union with Mina, Jonathan, Van helsing and Lucy's fiance burst in, flooding the Count's lair with daylight. Weakened by the light, Dracula fights against his adversaries, but fails, dying with a stake driven through his heart, turning into ash and fog.

Overall, what can I say... you have to see it to believe it. These mere words are but a faint echo of the show, doing it little justice as I struggle to translate a stunning and powerful performance into letters on your screen. Fluid, powerful, sensual, full of sexual tension, fear and victory, it was all of these and so much more. I can only hope that one day this performance will be repeated, giving me another chance to try and capture some of it in a way that can be passed on properly. To the performers, thank you for using your skills to such a high degree. To the promoters, well done, a masterpiece, truely.

Having never attended the ballet before, I was unsure what to expect from my evening, I was wonderfully impressed with everything I saw during the evening though!
Yet again, the Regent hosted a fantastic stage show, full of superb dancing, stunning set and lighting, seamless stage work and a thrilling story full of passion, fear and sensuousness.

The show opened with the stage dark and dreamy - dry ice made this scene more surreal - as Jonathan Harker lies sleeping, dreaming dark dreams, with wolves moving sinuously over the stage and him... He wakes with a scream and thus starts the show...

Act 1 begins with Jonathan leaving Charing Cross, farewelled by his wife Mina and Dr Van Heilsing, while there, they encounter Renfield, a mental patient who becomes a focus for the story.
Upon arrival in Transylvania, Jonathan witnesses the sacrifice of a wolf (which was scary in its realism, I almost expected it to bleed, so convincing were it's wounds) and is given a cross by a village woman who endeavours to stop him from going to the castle of Count Dracula.
Next we see Jonathan at the gates of the castle and they open to the Count (spectacularly done) walking down the stairs. Jonathan is soon overcome by the force of the Counts intense personality and sheer power, leaving him scarred and unstable upon his return to London.

Act 2 starts with a much lighter feel to it, almost playful in it's nature as Jonathan is with his wife and friends at Grand Hotel, Whitby. During this scene, the characters all dance and enjoy the company of each other, yet Jonathan feels uncomfortable as he senses Count Dracula drawing nearer on a ship from Russia.
Darkness pervades the scene as the Count arrives and takes Lucy (Mina's best friend) as his own. He plays with her, drinks from her and leaves.
Next we see Lucy in the clinic of Dr Van Heilsing (a noted vampire expert) where they try to save her from what is to come... but this fails and Dracula revisits Lucy, taking her and making her one of his own, a vampire.

Act 3 brings all we have seen already together. It is a two part scene, with what is happening in the foreground and the background. At the front Mina is alone in her room, she has an interlude with Renfield and is soon joined by Count Dracula, who is drawn to her inexplicably. With his intensity and brutality, he seduces and overpowers Mina, feeding her is own lifeblood and making her something more than human.
Behind this we have Renfield, in the sanatorium, who escapes to have a moment with Mina, then is captured, returned and when back meets with his master, Dracula. Dracula moves from here into Mina's room, all the while leaving Renfield doing what he does - being mad (ever so well, might I add).
The last scene opens with all those who feel Dracula's call gathering in a crypt. They glory in the power having their master so close gives to them and are joined by Lucy - who is now completely enthralled by Dracula - and then the man himself and Mina - who now is powerless to resist him. Renfield appears before his master and is sacrificed to the other Children of the Night.
As Dracula is about to make Mina his for eternity, Jonathan, Van Heilsing, Lucy's fiance and the Texan burst through the crypt wall, flooding the room with daylight, weakening Dracula enough to kill him, allowing Mina and Jonathan to reclaim their lives as thier own...

I was truly in awe of the whole production!
Having some knowledge of the backstage working of a theatre, I was truly amazed at the fluidness of the set changes, only once did I see anyone.
The lighting was used to convey the mood of each scene with fabulous results, the set was stunning - I'm still reeling with the simplicity and complexity of them all - the costumes were gorgeous, they fit the period and gave the dancers all the scope they needed to create each scene through their movements.

I was amazed at the depth of emotion that was conveyed through the dances, the passion, the fear, the darkness of spirit, the innate goodness in some and the badness in others.
With only a couple of words spoken throughout the whole ballet, the story was told, with depth, with integrity to the original story and with feelings that seeped across the stage and into the pores of every member of the audience.

Four international pro comedians will be hitting the road bringing some of the globes' finest, and most hilarious comedy to Hamilton, Tauranga, Rotorua, New Plymouth, Wellington and Napier this April and May. Fresh from the 2017 NZ ... more...