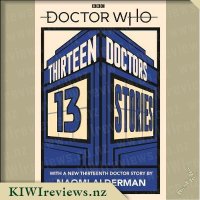 Twelve wonderful tales of adventure, science, magic, monsters and time travel - featuring all twelve Doctors - are waiting for you in this very special Doctor Who book. And now they're joined by a very exciting, and very exclusive, new tale that will star the Thirteenth Doctor, as she battles to save the universe with her three close and trusted friends.

Thirteen Doctors is one of those books where I borrowed if from the library, started reading it and then had to return it, bought a copy and left it gathering dust on my shelf until I finally sat down and read it all. All thirteen Doctors get their own short story (yes, that includes McGann's Doctor), travelling throughout time and space, meeting an old foe or two (Daleks, The Master, The Rani...) as well as brand new situations. I will admit that I only recognized half of the authors who worked on this book and wasn't too sure about how well it would work, but that is where the benefit of each regeneration being so different comes into play.

While I have watched far more of the modern Doctors, each story captured the Doctors traits and personalities so well, so I never felt like it was inauthentic. The Roots of Evil, featuring the fourth Doctor and Leela, stands out as a firm favourite, it linked the story to a future regeneration (which was fun), as well as being packed full of action and an interesting concept (a giant living tree as a temporary planet). Spore, featuring the eighth Doctor not only was an interesting 'monster' story, but it felt like it fit in so perfectly for the time period in which the film aired. Whilst I can say that there are some stories that I just didn't like as much, I couldn't fault any of them in terms of matching their Doctor in vibe and personality.

This is a good book to have for any Doctor Who fan (perfect for some light reading, or reading to the kids).

The kitchen knife jammed into his cold heart pinned a cardboard sign to his well-toned chest. It read: Santa Says You've Been Bad!!! Ho, Ho, Ho! It's Christmas, but Lieutenant Eve Dallas is in no mood to celebrate. While her charismatic husband Roarke plans a huge, glittering party, Eve has murder on her mind. The victim - personal trainer Trey Ziegler - was trouble in life and is causing even more problems in death. Vain, unfaithful ... more...