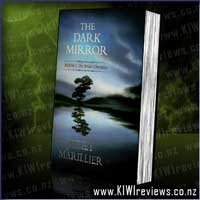 When the child Bridei is sent by his parents to live with the druid Broichan, he knows only that he has left his home and family to learn to be warrior and scholar, strategist and sage. He is not aware that in the divided and war-torn kingdom of Fortriu a secret council of elders, including Broichan, has long been making plans for the future of their homeland: with Bridei himself central to their strategy.

As the only child in Broichan's remote household, Bridei learns early to deal with fear and loneliness. So when he awakes one freezing midwinter's night to find a baby on the doorstep, he thanks the gods for their precious gift of a companion and takes her in - and with her arrival Broichan's master plan gains a dangerously unpredictable new element.

As the foundling Tuala grows from fey child to beguiling young woman, and Bridei moves ever closer to his grand destiny, Broichan anticipates a perilous complication to his long-laid plans. As well, powerful forces both close to home and in other lands are ranged against the secret council, enemies who will employ whatever means they can to stop the druid from bringing his plan to fruition, even if they must endanger Bridei's life.

Reading the blurb on the back, I didn't really think all that much about the sound of the book- but I didn't have anything better to read at the time, so figured that The Dark Mirror would just have to do. The first chapter took a bit to get through, not really capturing my interest at all until almost the end- but from there on in, I was well and truly hooked.
Broichan comes across cold, stern and totally unsuitable as a guardian for a small, lonely 5 year old boy, but as he starts to teach quiet, serious little Bridei the things he'll need to know to deal with the life already mapped out for him before he was even born, Broichan slowly becomes easier to like, and soon shows the briefest hints of the caring, dedicated father-figure he later becomes. This book is reasonably heavy going, and not the best of picks if you're just after a fun, easygoing fantasy read. But if you enjoy the more political and strategic side that fantasy books often contain, then you will find this far more enjoyable to read. Woven through the struggle of teaching Bridei how to be a future King, is the tale of the mysterious Tuala. Left on Broichan's doorstep as a mere baby, she is brought up, rather reluctantly by Broichan, like a little sister for Bridei. The young lad rapidly grows to adore the younger fey child, becoming rather protective as he finds himself often at odds with his foster father over her as her obvious origins set the old Druid on edge, making him worry that she is an inside threat to his plans for placing Bridei on Fortriu's throne. The relationship that grows between the two children, along with Tuala's search to learn more of who her parents are and the hardships she endures as an outsider, helped to ease the heavier political side, which I found to be occasionally on the tedious side. So by the end of the book, I was very keen to dive into the next one, '>Blade of Fortriu', and Juliet Marillier has become one of VERY few NZ authors who I enjoy enough to want to keep reading their books.
Overall - a great read, but kinda on the heavy side.

Eff was born a 13th child. Her twin bother - Lan - is the seventh son of a seventh son. This means he is supposed to possess amazing talent - and she's supposed to bring doom to everyone around her.

Undeterred, her family moves to the Frontier, where her father will be a professor of magic at a school perilously close to the magical divide that protects settlers from the beasts of the wilderness.